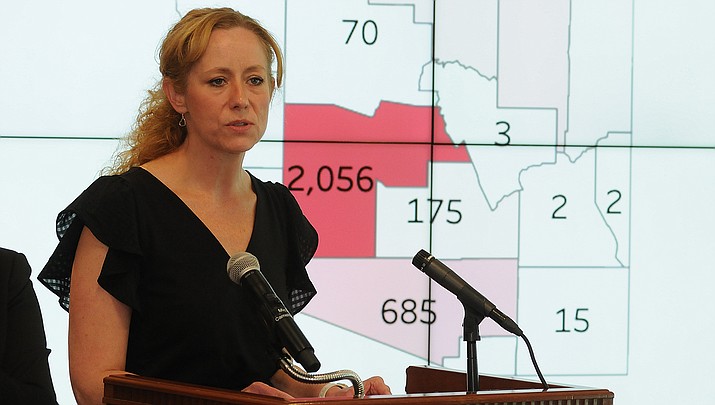 PHOENIX – Gov. Doug Ducey won't rescind his order denying Arizonans access to a drug to prevent COVID-19 that is now being used by President Trump.

The April 2 directive bars pharmacists from dispensing hydroxychloroquine or chloroquine unless they have a prescription from a doctor saying the patient actually has the virus. And even in that case, the governor limited the prescription to no more than a 14-day supply, with no refills without a new prescription.

It's even more specific than that. It spells out that prophylactic prescriptions for the drug – essentially prescribing it to keep people who don't have COVID-19 from getting it – "are strictly prohibited unless peer-reviewed evidence citing prophylactic evidence becomes available.”

And to date the only published study involves 62 patients in China taking hydroxychloroquine where the authors said the potential of the drug in treatment "has been partially confirmed.” But they also said there is the need for large-scale clinical and basic research.

The sole exception in Ducey's April 2 order denying prescriptions for chloroquine and hydroxychloroquine are for patients taking the drug "for treatment other than COVID-19.”

The issue arises as the president said Monday he had started taking hydroxychloroquine. And the White House on Wednesday confirmed that Trump's personal physician prescribed it to him as a preventative measure. That prescription could not be filled here in Arizona.

"We're not denying Arizonans any rights and privileges,” Ducey said Wednesday during a briefing on the latest on COVID-19 in Arizona.

But even Health Director Cara Christ, a physician herself, acknowledged that the ability of doctors to prescribe chloroquine and hydroxychloroquine in Arizona is limited to patients who need it for some reason other than to prevent COVID-19. That includes treatment for malaria and auto-immune disorders.

During the briefing, the governor said the infection situation in Arizona has not changed sufficiently to permit changes in what businesses and activities he is allowing. But Ducey said he is "thinking ahead of what is next.”

"Our goal is we want to open up summer camps, schools and youth activities,” he said. "All the evidence we have seen for the last four or five weeks say it is responsible and prudent to plan ahead.”

But the only thing on which he had any suggestion of timing deals with public schools. "We're working with the education community, school leaders on a plan to safely resume school in the fall,” he said.

Everything else, he said, involves doing things "the Arizona way.”

"It's going to be gradual and phased in” Ducey said. "We're going to have a phased-in return based on recommendations of the CDC and health experts.”

That issue of what health experts recommend has come up with Trump's disclosure of his use of hydroxychloroquine. The president actually has been touting the drug since March, mentioning them in a White House briefing.

That resulted in the U.S. Food and Drug Administration issuing a warning last month saying the drug poses a risk of severe heart rhythm problems. The agency said it should be taken only in a hospital or as part of a clinical trial.

Meanwhile, the presidential mentions created a rush of sorts by people trying to get the drug. And it was that which an aide to the governor told Capitol Media Services last month that resulted in the directive denying the ability of people to get it in a bid to prevent contracting the coronavirus.

"It is limited to the diagnosis or the suspected positive for COVID-19 so that we're not running into shortages for those individuals who are taking it for other reasons,” explained Trisa Guzman Glover, the governor's director of boards and commissions.

On Wednesday, though, Ducey said no one is being denied anything. "Of course, Arizonans can access needed pharmaceuticals and health care and medicine,” he said.

Christ said that's not entirely accurate. "It can be used if a physician feels that it is necessary,” she said. And in cases of COVID-19, she said, the order is "not to pre-prescribe it for anybody. But they can use it under certain circumstances.”

The Hill reported that White House press aide Kayleigh McEnany, in explaining Trump's decision to take the drug, linked it to legislation he signed in 2018 allowing terminally ill patients to try medications that have not been approved by the FDA. She said the same is true for people who are "facing a fatal illness.”