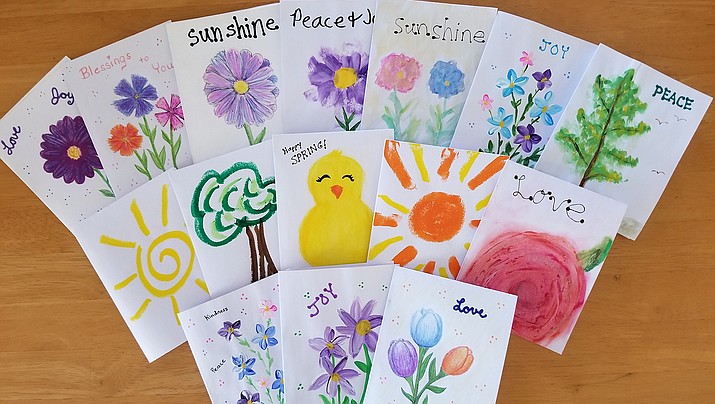 These are samples of the cards that Melissa Henak of Kingman has been giving to nursing home residents. (Photo by Agata Popeda/Kingman Miner) 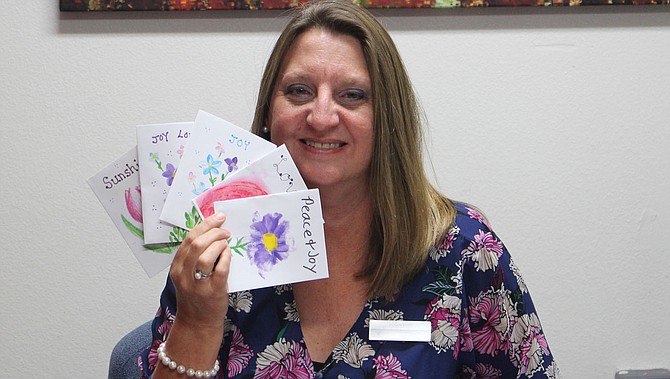 Melissa Henak of Kingman displays some of the cards that she has delivered to residents in nursing homes in the Kingman area and beyond. (Photo by Agata Popeda/Kingman Miner)

Melissa Henak is a local elder care adviser who assists individuals in need of long-term care services in accessing benefits to pay for the care they need.

She is based in Kingman, where she lives with her 80-year-old mother and disabled brother and works for the Elder Law Department of JacksonWhite, a full-service law firm in Mesa. She covers the area from Bullhead City and Lake Havasu City up to Flagstaff, and down to Camp Verde and Cottonwood.

“Right after the COVID-19 visitor restrictions in long-term care facilities took effect, our outreach team members began brainstorming ways that we could be an encouragement to the residents of care facilities, who suddenly found themselves isolated,” Henak said. “They were unable to have visits from family or friends.”

That’s how the idea of simple, hand-crafted encouragement cards with bright colors came to be. Henak approached her talented friend, Mary Brown, and her equally talented 10-year-old daughter, Elise, about the possibility of them assisting with the creation of the cards.

“All total, Mary and Elise hand-painted or drew 75 custom designs, with me adding another 15 or so,” Henak said. “Then, I hand wrote an encouraging message of hope in each card and signed it.”

Initially, they planned to distribute the originals, but it soon became apparent that this project was exceeding expectations and Henak decided to copy the 90 cards in bulk, so they could reach more residents.

While not considering herself an artist, Henak draw some of the cards herself: trees and smiley faces – “juvenile work,” she laughed. And then, there is the whole ordeal of folding, a “labor of love,” in which Henak’s mother happily assisted.

“My outreach team counterparts down in the Valley, who got a slightly later start on their deliveries, have delivered 1,420 cards to 18 buildings thus far, with more to go,” she said. “We anticipate reaching at least 4,000 residents in long-term care settings across the state of Arizona by the time we are done.”

The smallest facility was an assisted living group home in Lake Havasu City with six residents and the largest was a transitional care facility (independent living through skilled nursing) in Flagstaff with 160 residents, with everything in between. At small facilities, the message was personalized to include the names of the residents.

The cards were personally delivered by Henak to staff in the parking lot or outside the front door of the care facilities in Mohave County. All the others were sent via mail. Most of the facilities held the cards for up to three days before staff distributed them to their residents, in order to ensure the safety of the residents by minimizing any possible exposure to the coronavirus from outside the facility, Henak said.

Based on the emails that Henak received and showed to the Miner, the cards were a great success. They “brought smiles to faces,” Henak said, noting the residents were touched that someone took the time.

“It was our desire ... to offer a message of hope and to let others know that they haven’t been forgotten and that others care about them,” Henak said. “We wanted to be a light during dark, trying times and to brighten others’ days.”