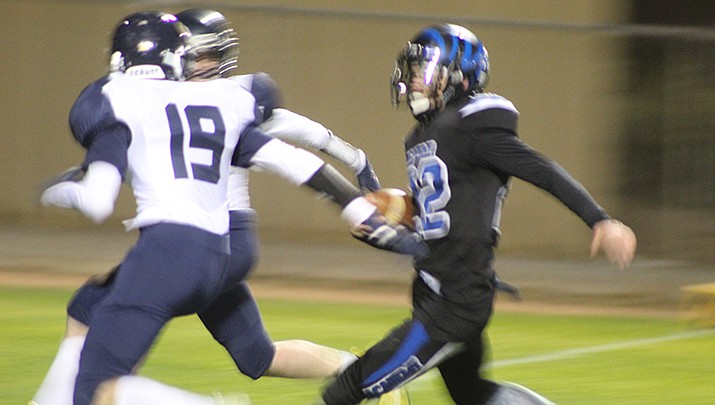 KINGMAN – Kingman Academy High School will have to settle for a moral victory.

The Griffins of Glendale Prep captured the football game and a playoff spot on Friday, Nov. 13, capping a 68-yard, 11-play drive in the final minute for a 26-24 win.

Academy finished the pandemic-shortened season with a 2-5 record, while Glendale Prep improved to 5-2.

Morgando may have been talking about the two 15-yard penalties that kept the Griffins’ game-winning drive alive.

The first flag came on fourth-down and set Glendale Prep up with a first down in Kingman territory. And the second put the Griffins on the doorstep, setting up a game-winning 12-yard touchdown pass from Glendale junior quarterback Samuel Terpstra to senior running back Malachi Mizysak.

It spoiled the night for an opportunistic Tiger team that came in as a longshot to grab a playoff slot.

Academy built a 16-6 lead midway through the third quarter by capitalizing on a short punt for a 40-yard scoring drive, cashing in from four yards out after recovering a fumble near the goal line, and scoring a safety when the punt snap sailed over the kicker’s head in the end zone.

But Glendale answered with touchdown drives of 98 and 58 yards to take a short-lived 20-16 lead midway through the final quarter, before Academy senior running back Isaac Carter went to work, reeling off a 51-yard run then punching it in from a yard out.

Carter’s run for the two-point conversion gave Academy a 24-20 lead with 3:14 to play, and set the stage for the Griffins’ last-minute heroics.

Carter and senior quarterback Charlie Anderson played key roles on both sides of the ball in their final outing.

Carter rushed for 60 yards and two touchdowns and caught three passes on offense. He logged at least four quarterback sacks and several tackles for losses, including sacks on consecutive plays to thwart a Glendale drive.

Anderson ran for a touchdown, threw for a two-point conversion, and completed 8-of-20 passes. He also recovered a Griffin fumble at the Glendale 4 yard line after freshman lineman Jack Biddinger jarred the ball loose, leading to a Carter touchdown run.

Glendale outgained Academy 328 yards to 129 yards thanks to Terpstra, who completed 20 of 36 passes for 300 yards. Juniors AJ Blanton and Evan Steadman intercepted passes for Academy.

“We played well on defense, and exploited some things,” Morgando said. “They hit a few deep balls and got some breaks.”