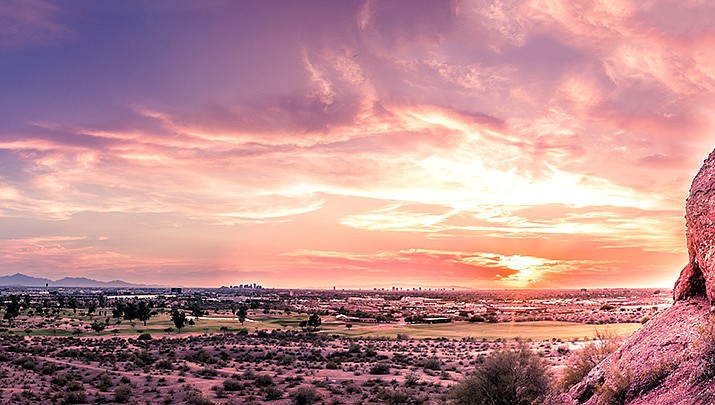 Phoenix has set another heat record in a record-setting year. A sunset over Phoenix is shown. (Adobe image)

PHOENIX - Another heat record for Phoenix.

Phoenix already has shattered its record for the most days of triple-digit heat in a calendar year with 144, topping the previous record of 143 days in 1989.

Between June and August this year, Phoenix reported 50 days with a high temperature of at least 110 degrees. That bested the record of 33 days set in 2011.

Phoenix also had its hottest August ever since tracking began in 1896.

PHOENIX - A Wednesday hearing has been scheduled for a judge to hear arguments in the Arizona Republican Party’s lawsuit seeking to change how Maricopa County conducts a hand-count audit of a sampling of ballots as a quality control measure.

The party wants the sample measured on a precinct level, rather than among the county’s new vote centers, which let people vote at any location across the county.

The county is seeking to dismiss the lawsuit, saying the audit has already been completed, the GOP waited too long to file their challenge and warned it would be time consuming to open bags of ballots to figure out the precincts in which they were cast.

While Maricopa County faces a Nov. 23 deadline for certifying its elections results, GOP lawyers argue the certification could be postponed until its issues are resolved.

Maricopa County plans to certify its results on Thursday or Friday.

In a separate case in Maricopa County, a judge is scheduled to hear arguments Friday in a lawsuit that asks a court to let one voter recast her ballot after she said a tabulator rejected it on Election day and poll workers denied her request for another ballot. The legal challenge was filed by the lawyers who had previously filed the now-dismissed #Sharpiegate lawsuit. It has two of the plaintiffs from the old suit and emphasizes markers far less than the earlier Sharpiegate lawsuit.

PHOENIX - State prosecutors have indicted Arizona’s largest petition gathering firm, alleging the company commissioned by the Prop 208 campaign illegally gave bonuses to gatherers based on the number of signatures collected. The indictment alleges AZ Petition Partners awarded at least 50 bonuses from $20 to $1,200.

The Arizona Attorney General’s Office said Monday that a state law enacted in 2017 made it illegal to pay gatherers per signature they collected. Each of the 50 misdemeanor charges carries a large fine if AZ Petition Partners is found guilty.

AZ Petition Partners is a separate entity from Invest in Education, the committee that backed the ballot initiative. “The allegation that Petition Partners paid its circulators an illegal bonus by the signature is absolutely false,” said David Leibowitz, a spokesperson for the company.

Proposition 208’s backers needed to collect 237,654 signatures to get the measure on the November ballot. They filed 435,000 with the Secretary of State’s office. Voters earlier this month approved the ballot initiative, which taxes the state’s highest earners to raise money for education.