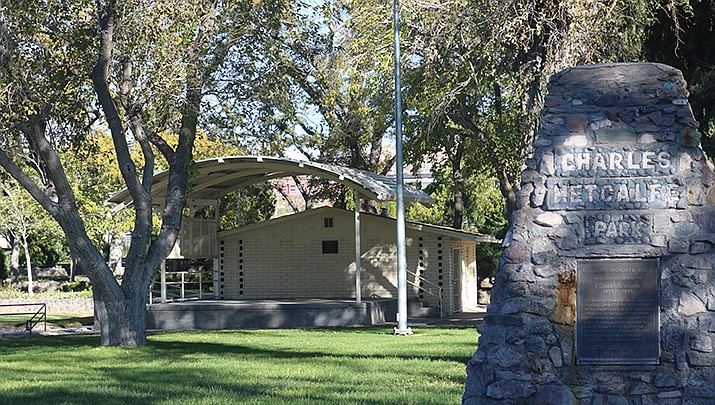 The music will begin at 7 a.m. on Saturday, Nov. 21 at Metcalfe Park in Kingman. (Photo by Travis Rains/Kingman Miner)

Live music is set to return to Metcalfe Park in force on Saturday, Nov. 21, as the Kingman Music Studio hosts its first concert ever comprised of mostly local musicians playing a variety of genres all day long, from 7 a.m. until 9 p.m.

“We’re musicians, and since COVID we cannot play literally anywhere,” said Zachary Mendenhall, owner of the Kingman Music Studio. “Everywhere is shut down, and we had this idea of what would it take to have a concert during COVID.”

The answer is to observe COVID-19 recommendations including mask wearing, social distancing and heightened sanitization processes. That’s why the studio has rented out Metcalfe Park, 315 W. Beale St., as it is an outdoor venue. There will be approximately 200 masks available for attendees at the event, and while any kind of enforcement is made tricky by Metcalfe being an outdoor, public space, Mendenhall said organizers would take to the mic throughout the event to remind the crowd to remain masked up and socially distanced.

“We’re not trying to say COVID’s not real or anything by doing this event, because it is real,” Mendenhall said. “The last thing, we would hate for someone to get sick through the event, and that’s something that’s a really big fear. But on the other hand, there’s the hand that says musicians need to play. That’s why we’re calling it Let ‘Em Play, so these bands can express themselves artistically. I feel like you have to live even in hard times, and that’s what keeps people going, and that’s kind of the point of this event as a whole.”

Being mindful of COVID-19 safety precautions is the only consideration for people interested in attending Saturday, as there will be no admission charge.

The concert will take extra precautions by limiting attendance to 50 people at a time.

However, since the event is set to last all day long with performers playing for 30 minutes followed by a 30-minute break, people will have plenty of opportunities to duck in and out of the concert as their time and the space allow.

“There are a bunch of different styles that are going to be there,” Mendenhall said, noting solo acts, and larger bands performing everything from country to punk and classic rock. “Going through the whole day, we hope that if there’s 30 minutes between performances we won’t have too many people in at one time. It’s purposely set up so that people can leave and then people can come in and it’s not everybody mashed in all at one time.”

Also, all of the performers will be using the studio’s equipment on Saturday, with the exception of snares and symbols. The studio will also provide disposable microphone covers to prevent the spread of germs from one artist to another.

“You guys get on stage, plug into our equipment that’s already been sound checked and play, and then that way we don’t have to take your stuff that’s been in your house and expose it to the public,” said Casey Frank with the Kingman Music Studio.

Some of the performers set to take the stage have never played a concert before, which Mendenhall and Frank said is great news for the local music scene. With the exception of a band from Bullhead City and a performer from California, Kingman-area artists will dominate the stage.

“People have been cooped up in the house quite a bit, and I feel this event is really going to help with that,” Frank said. “The idea is we want to be smart about it.”

The lineup for Saturday’s concert at Metcalfe Park is as follows:

Kingman Music Studio brings high-quality recording sessions to town
Sounds of Kingman: Back at that Monkey Biz’nezz
Sounds of Kingman is bringing music, culture to downtown Kingman at a family-friendly price
Mohave Community Orchestra concert Saturday
Riptides sure to have crowd on its feet at Concert in the Park
Event Calendar