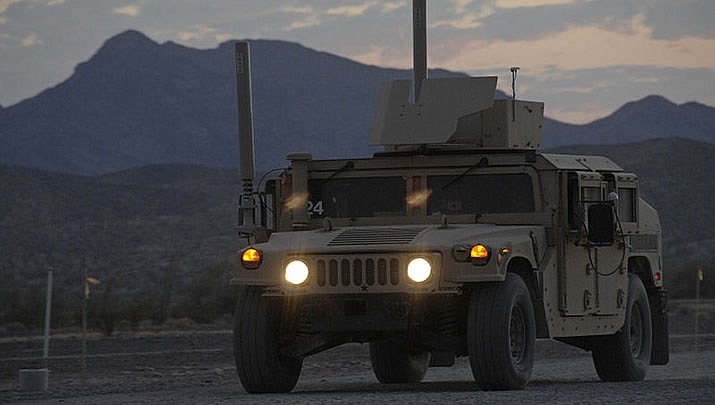 YUMA - A construction crew in southern Arizona has discovered an unexploded howitzer round while working on a road.

Yuma Proving Ground's explosives experts identified the ordnance as a 155 millimeter howitzer round of a kind that were used in World War II and the Vietnam War, The Sun reported.

The round found on Martinez Lake Road during an $18 million improvement project that began in February was the second discovered this year. The first was found in April in the same location. Martinez Lake Road was closed for several hours Tuesday while crews worked to remove the round, authorities said.

Both rounds "were found more than one mile outside of YPG’s boundaries, and have nothing to do with the proving ground’s present-day testing,” Yuma Proving Ground spokesperson Mark Schauer said.

The area was once part of the Desert Training Center, also known as the California-Arizona Maneuver Area, which was established in 1942 to train U.S. forces in desert warfare, officials said. The area stretches 18,000 square miles across the outskirts of Pomona, California, east to within 50 miles of Phoenix, south to the suburbs of Yuma and north into the southern tip of Nevada. The center was operational for two years, where 13 infantry divisions and seven armored divisions trained. The road project is expected to be completed in April 2021.

PHOENIX - The city of Phoenix has renamed two streets many consider offensive. One is because of its demeaning reference to Native American women and the other because of its glorification of the Confederacy.

Robert E. Lee Street will now become Desert Cactus Street and Squaw Peak Drive will change to Piestewa Peak Drive, in honor of fallen Native American soldier Lori Piestewa. Piestewa was a member of the Hopi tribe and was killed during an ambush in Iraq in 2003.

The Phoenix City Council on Wednesday approved both new names to go into effect on March 1. Mayor Kate Gallego and Councilwoman Thelda Williams initiated the process to change the street names in June.

Robert E. Lee Street is named after the Confederate general who led the uprising against the United States in the Civil War. “Squaw” is a slur historically used to describe Native American women.

“We are looking forward to having street names that reflect our values. We don’t want shadows of the confederacy, or for a young girl, like the daughters we talked about here today, to see that street name as they drive to school or about in our community,” Gallego said.

But some residents do not agree with the decision, arguing that it will require a host of changes for residents and business owners on each of the streets.

“I’m mad as hell this whole thing was pushed into the throats of the residents,” Rick Klawitter said. “There are so many places that addresses exist, that our addresses are part of our records. Online shopping, banking, all the city services, but it doesn’t matter. They don’t care about that.”

Councilman Carlos Garcia has acknowledged the change will be difficult for some, but hopes everyone “shows the same grace as we continue to push policy changes for Black lives.”