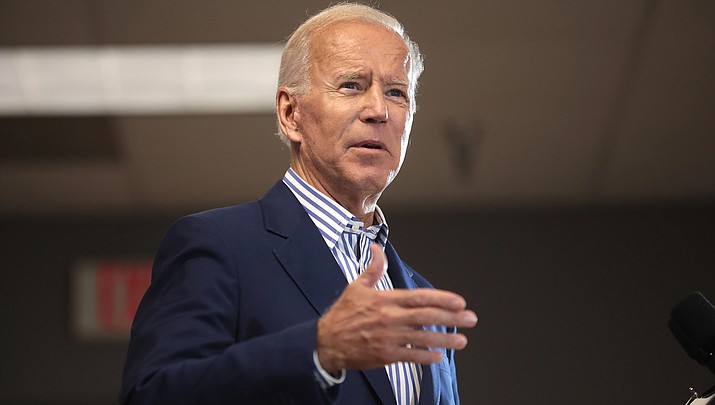 Catholic bishops in the U.S. are divided over support for President-elect Joe Biden in part due to his stance on abortion. (Photo by Gage Skidmore, cc-by-sa-2.0, https://bit.ly/2xY9ExO)

NEW YORK – Catholics split almost evenly in supporting Donald Trump or Joe Biden in the presidential election. Now they’re sharply divided over a declaration by the head of the U.S. Conference of Catholic Bishops that the president-elect's support for abortion rights presents the church with a “difficult and complex situation.”

The USCCB’s president, Los Angeles Archbishop José Gomez, made that statement Tuesday near the close of the conference’s national meeting and announced the formation of a working group of bishops to assess the dilemma. Some experts said it's possible the group will discuss whether Biden – a practicing Roman Catholic – should be barred from partaking in Holy Communion.

Catholic anti-abortion activists hope the bishops follow through with tough words and action, making clear that Catholic politicians who support abortion are in breach of church teaching.

Biden’s policy agenda “is incompatible with the Catholic position on abortion and the protection of innocent human life,” said Marjorie Dannenfelser, president of the Susan B. Anthony List, a leading anti-abortion group.

But others criticized the USCCB as setting the stage for potential conflict with the president-elect just days after he received a congratulatory call from Pope Francis. Biden said he hopes to work with the pontiff on issues such as climate change, poverty and immigration.

“The USCCB leadership simply can’t embrace the idea of engagement and goodwill that Pope Francis has asked of them,” said David Gibson, director of Fordham University’s Center on Religion and Culture. “That the pope called to congratulate Biden and discussed working together while the American bishops capped their meeting with plans to do battle with the incoming president says it all.”

Natalia Imperatori-Lee, a professor of religious studies at Manhattan College, also was dismayed by the USCCB.

“It seems they’d like to start an antagonistic relationship with only the second Catholic to be elected the president of this country,” she said via email. “This is appalling.”

“The bishops have chosen to continue the culture war that uses abortion to drive wedges in our church and our society, because they see that as a winning issue for them,” she wrote.

Gomez has welcomed many of Biden’s stances, including on immigration, racial justice and climate change. But some conservative bishops, citing the church’s opposition to abortion, have been outspoken in their criticism after Gomez congratulated Biden on his victory.

On Tuesday, as the USCCB ended the public portion of its meeting, Gomez read a statement that arose from discussions with some of the agitated bishops.

“The president-elect has given us reason to think he will support some good policies” but also some that “undermine our preeminent priority of the elimination of abortion," the archbishop said.

“These policies pose a serious threat to the common good,” Gomez added. “When politicians who profess the Catholic faith support them ... it creates confusion among the faithful about what the church actually teaches on these questions.”

Gomez said he would form a working group to address the matter, headed by the USCCB’s vice president, Detroit Archbishop Allen Vigneron.

Two Catholic academics, responding to queries from The Associated Press, did not rule out the possibility that the working group could discuss whether Biden should be barred from partaking in Holy Communion because of his abortion stance.

That question “does not turn on what political office he holds, but on his public conduct as a Catholic,” said Edward Peters, professor of canon law at Sacred Heart Major Seminary in Detroit.

“His prominence in public life makes his case more visible, certainly,” Peters added. "But, in the end, it is his own behavior that determines whether he should be refused Holy Communion.”

Thomas Groome, a theology professor at Boston College, said conservative bishops on the working group would likely push for Biden to be denied Communion. But he noted that Biden’s support for abortion rights is, according to many surveys, shared by most U.S. Catholics.

Groome called Gomez’s statement “dreadfully unfortunate" and said “the bishops should be helping bring us together rather than driving us apart.”

Chieko Noguchi, a USCCB spokeswoman, said the working group has not yet met and declined to comment on whether it would discuss a potential Communion ban for Biden. There has been no response by Biden’s transition team to AP requests for comment.

Divisions within the USCCB’s ranks over the president-elect have been stark, with some, such as Bishop Joseph Strickland of Tyler, Texas, balking at recognizing his victory.

“I appreciate Archbishop Gomez’ acknowledgment that Vice President Biden’s proposed policies are divergent from Catholic teaching in significant ways,” Strickland tweeted Tuesday. “It remains troubling that the USCCB treats the election as certified when it is not & it continues to be a source of division.”

Journalists for Catholic news outlets pointed out that the USCCB did not wait for election results to be certified in 2016, when it swiftly congratulated Trump after Election Day.

Kristan Hawkins, a Catholic who is president of Students for Life of America, said leaders of the U.S. church need to be blunter in condeming Catholic politicians who support abortion rights.

“This pretense that ending preborn life is negotiable with the church does create chaos and confusion,” Hawkins said. “This failure of leadership gives women who know that abortion is wrong the permission they’re looking for to get an abortion."

“They are, in fact, well-informed and have used their consciences in their choice both to elect President-elect Biden and to support reproductive health care,” she said.

In the election, 50% of Catholic voters backed Trump and 49% favored Biden, according to VoteCast, a survey of more than 110,000 voters nationwide conducted for The Associated Press by NORC at the University of Chicago.