Cards’ loss to Seahawks kicks off week in NFL 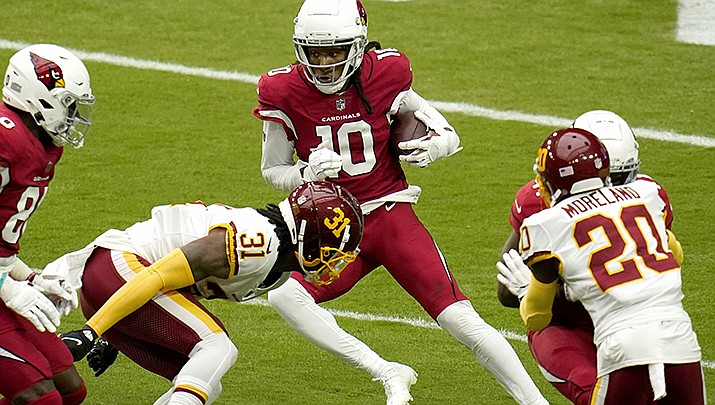 DeAndre Hopkins of the Arizona Cardinals became the youngest wide receiver in NFL history to catch 700 passes. He reached the mark during the Cardinals’ 28-21 loss to the Seattle Seahawks in Seattle on Thursday, Nov. 19. (AP file photo/Ross D. Franklin)

SEATTLE - It was a flashback performance for the Seattle Seahawks, and coach Pete Carroll enjoyed the show.

A bruising running game. Russell Wilson making plays without being asked to do everything. And the Seahawks defense coming through in key moments to shut down Kyler Murray and the Arizona Cardinals for a 28-21 win Thursday night.

Wilson still did his part, throwing for two touchdowns and rebounding from his worst performance of the season just a few days ago. But he had help in the form of Carlos Hyde rushing for 79 yards and a touchdown, and a defense that sacked Murray three times, including Carlos Dunlap’s clinching play inside the final minute.

“Our guys really wanted to turn things and get back on track,” Carroll said. “And even with all of the situations, with all the guys in and out in the lineup and all that, it just didn’t matter. Guys played really well across the board.”

Wilson was flawless, erasing the mistakes from the past four weeks when Seattle dropped three of four, including losses in the past two weeks to Buffalo and the Los Angeles Rams. The skid left Seattle in a tie atop the NFC West with the Rams and Cardinals.

For a few days at least, Seattle (7-3) will be back on top alone until the Rams play on Monday night against Tampa Bay. It was an important victory for the Seahawks heading into the softest part of their schedule, with four upcoming games against teams with a combined 8-28-1 record.

Wilson was 23 of 28 for 197 yards and TD passes of 25 yards to DK Metcalf and 11 yards to Tyler Lockett in the first half. Wilson had committed 10 turnovers in the previous four games combined, a stretch that started with Seattle’s 37-34 overtime loss to Arizona in Week 7.

Lockett, who had 15 catches for 200 yards and three TDs in the first meeting with Arizona, had another nine catches for 67 yards.

Murray and DeAndre Hopkins couldn’t rekindle the magic from their last-second touchdown to beat Buffalo last Sunday. Murray was 29 of 42 for 269 yards and two TDs, but Seattle was able to get the kind of pressure on the QB that was missing from the first meeting.

“They definitely played for me in certain situations but like I said, we put up 21, had a chance to win the game at the end, but throughout the game, we started slow and kept shooting ourselves in the foot,” Murray said.

And that pressure came through in the closing seconds. On fourth-and-10 at the Seattle 27 with 38 seconds left, Dunlap got around the edge and tackled Murray for his second sack of the night. Seattle finished with three sacks and seven QB hits after not touching Murray in the first meeting.

Arizona (6-4) closed to 23-21 with 13:19 left when Murray capped a 15-play, 90-yard drive with a 3-yard TD pass to Chase Edmonds. The Cardinals defense held, but backed up near their goal line, J.R. Sweezy was called for holding on L.J. Collier in the end zone, giving Seattle a safety with 9:12 left.

Arizona almost didn’t get the ball back. Seattle ran nearly seven minutes off the clock and Jason Myers’ 41-yard field goal gave the Seahawks a 28-21 lead with 2:19 to go.

Hopkins became the youngest player in league history to reach 700 career receptions with his lone catch in the first half. Hopkins, 28, bettered the previous record held by his teammate, Larry Fitzgerald. Fitzgerald was just past his 29th birthday when he reached 700 catches.

But Hopkins was limited to five catches for 51 yards. Fitzgerald led Arizona with eight receptions.

It's difficult to sneak up on anybody in the NFL, given the attention the sport gets everywhere.

Yet the Indianapolis Colts have been something of a hidden secret at 6-3. If you're surprised to see them tied with Tennessee atop the AFC South, it's excusable.

After beating the Titans, should they handle one of the NFL's elite teams, the Packers, on Sunday, well, evaluations of the Colts will change from outsider to contender.

Green Bay (7-2) is solidly in control of the NFC North and in strong position to pursue the conference's top seed and lone playoffs bye. The Packers have only one future opponent that currently has a winning record, the Titans.

How much have the Chiefs dominated the AFC West? Kansas City has won 17 of the past 19 road games in the division, losing only to the Raiders in 2014 and ’17. Kansas City also has won 17 of its past 18 games overall, including the playoffs, with the only loss coming last month to Las Vegas.

The Raiders believe they are prepared for a shootout against Patrick Mahomes and Co. Mahomes has 25 touchdown passes and one interception; Drew Brees in 2018 is the only quarterback to throw more TDs before his second pick, 26. And KC looks to score at least 23 points for an NFL-record 24th straight game.

But Las Vegas has its running game tuned up – the Raiders have run for at least 150 yards in three straight games. They haven’t done four in a row since an eight-game streak in 1985. Derek Carr had one of his best games in the win over the Chiefs with 347 yards passing and three TDs.

For all the excitement about the offenses, this one could come down to a pair of dependable defensive units.

LA’s defense has allowed 29 points in the second half this season, including just two touchdowns, both by Buffalo in Week 3. The Rams have allowed an NFL-low nine touchdown passes, including just one TD throw in their six victories. In Aaron Donald, they have the most dominant defender in the league, and Tom Brady will be facing a top-level secondary led by Jalen Ramsey.

Meanwhile, the Bucs lead the NFL in run defense (76.6 ypg) and are tied for first with 17 takeaways.

Other Sunday games include: