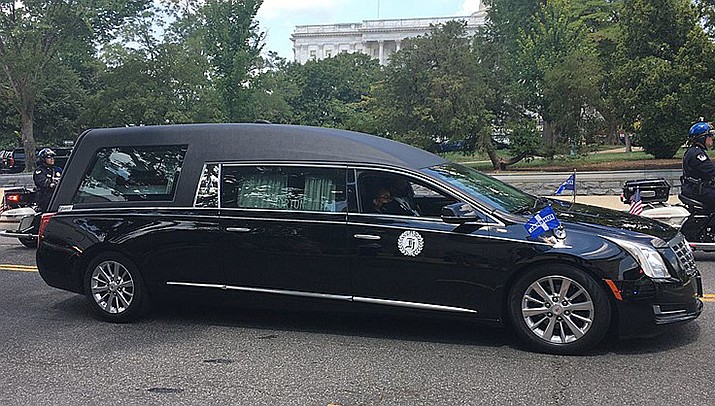 An Arizona funeral director is facing disciplinary action for allowing a service to be held at the wrong grave, then later moving the casket without notifying the family. A funeral procession is shown. (Photo by U.S. Congress/Public domain)

PHOENIX - An Arizona funeral director faces discipline for allowing a service to be held at the wrong grave site and then relocating the casket without informing the family.

Mark Dunn was issued a consent agreement by the Arizona State Board of Funeral Directors & Embalmers seeking suspension of his funeral directing license for 90 days, The Arizona Republic reported.

The licensing body for the funeral service industry voted to present Dunn with the agreement that would also fine him $1,500 and require 12 hours of ethics classes.

Dunn has until Dec. 15 to accept or the board will hold a disciplinary hearing.

Dunn was at the May 2019 graveside service for 64-year-old Jeffrey Stern when he realized the grave was in the wrong spot at Evergreen Mortuary, Cemetery & Crematory in Tucson.

Dunne remained quiet rather than informing Stern’s family as they performed the ritual of shoveling dirt onto the casket. After the family left the cemetery, Dunn directed another grave to be dug in the correct location and moved the casket without telling the family.

Stern’s widow, Cathy Stern, was informed of the mistake the next day. She was upset about the failure to consult her and distressed because their Jewish faith opposes removing a body from its burial place.

The state funeral board began an investigation earlier this year after Stern filed a complaint. Dunn has acknowledged the error and apologized to her.

Regulators said Dunn should have immediately informed the family and allowed them to decide whether to move the casket.

“I can’t wrap my mind around the fact that you stood there and didn’t say something. It floors me,” Bueler told Dunn at the board’s meeting earlier this month.

Dunn told the board he made the wrong decision by proceeding with the graveside service.

“I just didn’t want to cause the family more hurt," Dunn said. “It was wrong. But that was my honest intention.”

Dunn told Evergreen General Manager Cathy Fiorelli about his actions after the casket was relocated and she informed the rabbi who oversaw the service.

The funeral home is prepared to accept whatever discipline the state board deems appropriate for Dunn, she said.

“We take full responsibility,” Fiorelli told the board. “We never denied from the start that it was absolutely the wrong decision.”