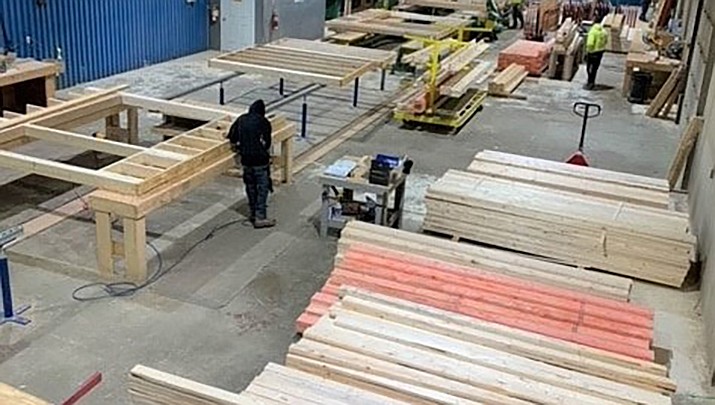 Colt Builders, a company that manufactures wood framing for multi-family housing, will be opening a plant in the Kingman Industrial Park. (Courtesy photo)

KINGMAN – Colt Builders, which the City of Kingman called a nationwide leader in commercial multifamily wood framing, is coming to the Kingman Industrial Park.

Janusz Sakowicz, vice president at Colt, said in a news release that the move comes as the company grows in the Southwest region. She also said there is an increasing percentage of work nationwide that requires prefabricated wall panels made of wood.

“We have owned and operated a wall panel plant in New Brunswick, Canada for years, and recognized the need for a second plant in the western U.S.,” Sakowicz explained. “After carefully studying several options from a geographic and logistical viewpoint, we decided on Kingman for a number of reasons.” She said Kingman is a central location to the firm’s expanding markets in California, Arizona and the mountain region.

“Of prime importance is the rail spur we are currently building, which will serve to bring in the lumber and sheathing goods required to fabricate our wall panels,” Sakowicz said.

Colt Builders’ new plant in Kingman is set to develop in phases and create 50 jobs, with full benefits and competitive wages, once complete. There will also exist the opportunity for growth within the company, the release noted.

“Based on Colt Builders’ needs, Kingman just made sense,” said Bennett Bratley, Kingman Industrial Park manager. “Our location to major markets and access to rail tipped the site selection scale in our direction. Quality companies like Colt Builders will continue to choose Kingman which means more jobs for our residents. It also translates into additional revenue to support our schools, recreational amenities, public safety and improvement to our infrastructure. We will continue to make it our priority to market the Kingman Industrial Park in an effort to bring quality companies to our community.”

“Syler went on to say that they have been fortunate to locate and contract with two very professional and knowledgeable local engineering and construction collaborators, who have been instrumental in their progress to date,” the release noted.

According to the release, the first phase of the facility will see a $3 million capital investment into the industrial park, and will include a rail spur, production building and two large lumber storage buildings.

The project will also include internal concrete roadways, a drainage system and utilities. The total investment for the new location is estimated at approximately $9 million, with the business expected to be operational by early 2021.