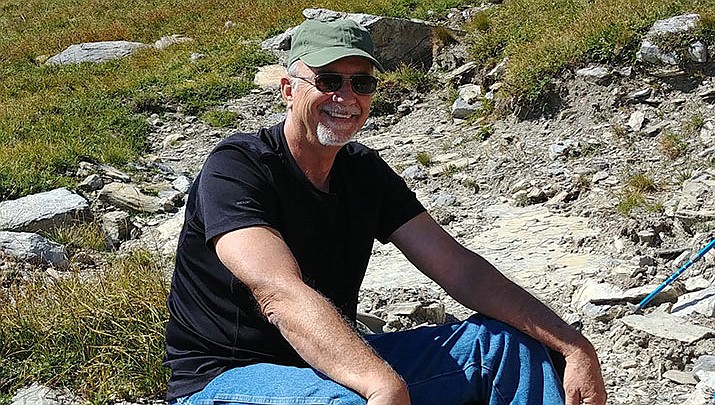 Driving home on Interstate 40 after working in the mountains east of Kingman, I’m always amazed at the unique Kingman skyline. No, not the human impact on the terrain but the natural formations of Bull Mountain, Cherum Peak and the mesas that frame Coyote Pass. The buttes and peaks are stark and imposing but they are home. The different colors, textures and patterns hide secrets of their formation and treasures that wait for those who commune with them. Prospectors searched for those secrets and some found their fortunes in the veins of the Cerbats and Hualapais while others just found hard work and misery. Even today there are some that still toil in the mountains looking for riches, but unless they understand the mountains, their search is doomed to failure.

The rocks communicate with us if we “listen.” But first we need to understand their language. It’s not a complicated language. Mostly what is needed is common sense and a keen observing eye. Getting to know some basic geology terms will definitely help. In this column I’ll try to introduce the readers to Mohave County rocks so that all can start a “conversation” with the geologic formations.

The most visibly prominent geologic formations in the Kingman area are those exposed in the roadcuts of I-40 as it drops from Hilltop to downtown. These are prominent cliffs of white-to-light tan with a very rough, darker-colored outer skin that is pockmarked with holes. I’ve heard it called limestone and tufa, but it’s a formation called the Peach Springs Tuff. The rock was formed by a gigantic volcanic explosion. Thousands of cubic feet of rock and pumice were blasted into the air and then settled to the ground in horizontal layers extending from southern California to the town of Peach Springs. For many years geologists couldn’t find the volcano that was the source of the explosion but then they found the Silver Creek Caldera. It was difficult to identify because many things happened since the explosion and had hidden its form. Now we understand that the Silver Creek Caldera was very similar to the Yellowstone Caldera, the difference being that the Yellowstone Caldera is still active with hot springs, geysers and a hot-spot at depth and the Silver Creek Caldera is not.

Caldera is the Spanish word for a kettle or pot. It’s used by geologists to denote a large kettle-shaped structure that was filled with molten rock of a specific type – very viscous rhyolitic lava. These types of volcanoes commonly explode rather than spew out low viscosity lava that flows on the ground like the ones seen in Hawaii. Precious metal deposits are commonly found around calderas so the fact that there was a lot of gold around Oatman gave geologists the suspicion that the caldera was nearby.

How do we know the rock is a volcanic tuff – a rock that was blasted into the air and welded together when it fell to earth? Take a close look at an outcrop, such as the one behind the Union 76 gas station on the northwest side of Beale Street and I-40. A 10x power hand lens is helpful to see the finer features.

Note the light color, poorly welded pumice (a very light and porous volcanic rock formed when a gas-rich froth of glassy lava solidifies rapidly) and rock fragments (pieces of different rocks) making up the outcrop. This is near the top of the Peach Springs Tuff formation.

How can we tell if we’re near the top or the bottom of a particular formation? Some formations have very different looking sections and it’s easy to know how deep the bottom is or how close to the top you are. Developers in the Kingman area would love to know how much of the hard parts of the Peach Springs Tuff they need to hammer out before they hit softer rock. To the untrained eye all the tuff looks the same but to an observant person, there are differences.

The tuff at White Cliffs Park is the lower part of the formation made up of non-welded pumice separated from a lower formation by a thin, sandstone unit. This part of the tuff is soft and easily dug. The drive down I-40 or Route 66 from Hilltop goes through the middle part of the tuff where it’s harder. During the construction of I-40, they were delayed because someone didn’t anticipate how hard the digging of the welded portion of the tuff would be. I remember trucks and drills running day and night to get through the hard part. As you drive through the canyon on I-40 or Route 66, look for anything that would help you know where you are in the formation. Notice that the welded sections of the tuff have vertical fractures, a rough form of columnar jointing while the non-welded sections have horizontal bedding. These features give you a guide so that you know how much farther you need to dig to get out of the Peach Springs Tuff. Deep enough?

Why is it called Peach Springs Tuff? Because it was first studied near the town of Peach Springs and then that same tuff was identified in other areas. The geologist who first studies an area gets to name the formations. Too bad he/she wasn’t working near Kingman so it would’ve been called the Kingman Tuff.