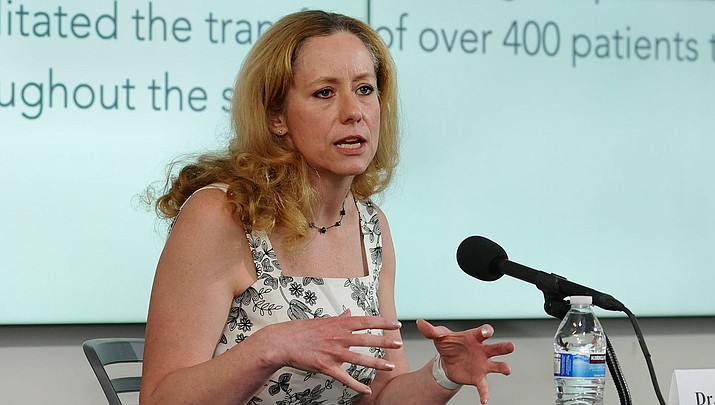 All 15 counties in Arizona have cleared benchmarks to allow partial reopening of all business. Arizona Health Director Dr. Cara Christ is shown addressing the media. (File photo by Howard Fischer/For the Miner)

Arizona's statewide known case total increased to 219,212 and the death toll rose to 5,674, the Department of Health Services said.

The classification of largely rural Graham County in southeastern Arizona improved to “moderate transmission stage,” making it the final county to meet benchmarks for partial reopening of businesses such as indoor gyms and fitness centers, bars serving food and movie theaters, the department said.

One county, tiny Greenlee in southeastern Arizona, is at “minimal” status, the highest step below normal conditions.

The counties' classifications reflected continued decline of community spread of COVID-19, but the disease “remains in our communities, so it’s essential that everyone continue masking up, maintaining physical distance, washing our hands thoroughly and often, and taking other steps to reduce the spread,” said Dr. Cara Christ, Department of Health Services director.

The department's announcement of the counties' current classifications did not mention that Pima and Coconino counties recently had increased numbers of cases per capita above the reduced levels that previously improved their overall classifications to moderate.

Officials said earlier this week that counties' classifications wouldn't necessarily move them backward even if their benchmarks went back up into the “substantial" levels of community spread.

Department spokesman Steve Elliott told the Arizona Republic that the state wouldn't automatically reinstate tighter business restrictions and that state officials would work with county officials before any additional closures are ordered.

Elliott said the two counties' increases in per-capita cases resulted from extensive testing at the University of Arizona and Northern Arizona University.

According to Johns Hopkins University data analyzed by The Associated Press, Arizona’s seven-day rolling average of daily new cases dropped from 481 new cases on Sept. 16 to 460 on Wednesday.

Meanwhile, the seven-day rolling average of new deaths in the state rose slightly from just over 17 to just under 18.

For most people, the new coronavirus causes mild or moderate symptoms, such as fever and cough that clear up in two to three weeks. For some, especially older adults and people with existing health problems, it can cause more severe illness, including pneumonia and death.