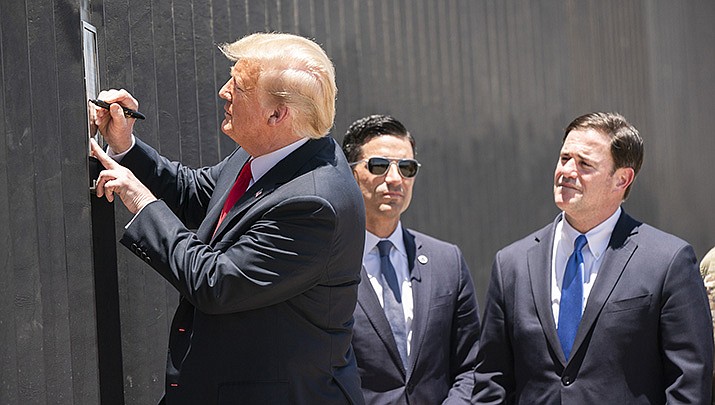 U.S. President Donald Trump has canceled his upcoming rallies in Arizona after contracting COVID-19. He is shown above with Arizona Gov. Doug Ducey during a trip to the border wall in Arizona in the spring of 2020. (Official White House photo/Public domain)

A day after announcing the rallies Monday and Tuesday in Tucson and Flagstaff, Trump’s campaign said all scheduled events will be postponed or switched to digital appearances.

Democrats Joe Biden and Kamala Harris have scheduled their first trip to Arizona on Thursday, though the campaign has not said where in the state they’ll appear or what sort of event they’ll hold.

Biden’s doctor said Friday he tested negative for COVID-19. The former vice president traveled to Michigan but his schedule there was pared back and it wasn’t clear whether Trump’s diagnosis would alter Biden’s travel plans going forward.

Biden did not campaign in Arizona ahead of the Democratic primary in March, which he won comfortably amid the early stages of the coronavirus outbreak. A Democratic primary debate between Biden and Bernie Sanders was moved from Phoenix to a television studio in Washington.

Trump and Vice President Mike Pence have campaigned extensively in Arizona as they looks to keep a longtime Republican stronghold in their column.

Delays at Arizona MVD affecting some who want to vote

PHOENIX - Arizona's Motor Vehicle Division has experienced significant backlogs and wait times for callers, including some people trying to get new IDs so they can register to vote.

The division blamed the delays on coronavirus precautions. The agency switched to an appointment-only system with slots scheduled by phone.

Prior to March, the division helped 14,000 people daily in offices across the state. The offices now serve about 5,000 people per day.

“Unfortunately, it is still not clear when the COVID-19 crisis will allow MVD to utilize its full office-processing capacity again,” agency spokesman Doug Pacey said in an email to The Arizona Republic. “We know that customers are frustrated about delays and difficulties getting through on the phone. So are we.”

The delays are complicating some people's attempts to register to vote through the agency's online registration system ahead of the state's Oct. 5 deadline, the Republic reports. The system allows people to register to vote using the numbers from their driver's licenses or state identification.

For most people, the coronavirus causes mild or moderate symptoms, such as fever and cough that clear up in two to three weeks. For some — especially older adults and people with existing health problems – it can cause more severe illness, including pneumonia, and death.

Phoenix police: Body found in desert could be missing woman

PHOENIX - A body was found Thursday in a north Phoenix desert area and it could be that of a woman who has been missing for almost a month, police said.

They said the body believed to be 59-year-old Julie Concialdi was located about 3 p.m. Thursday and the Maricopa County Medical Examiner will try to positively identify it and determine the cause of death.

Police arrested 57-year-old Joseph Concialdi on Sept. 15 on suspicion of first-degree murder days after he reported his wife of 30 years missing.

They said forensic evidence led them to believe Julie Concialdi was a homicide victim.

Court documents described evidence of a sanitized crime scene at the couple’s Phoenix home house with blood that matched the woman’s DNA.

Police said he told them he last saw his wife on Sept. 4 when they had an argument over a vacation and he left to go camping near Payson.

Julie Concialdi’s family said she uncharacteristically stopped returning calls and messages on Sept. 2 and failed to show up for appointments and work.

PHOENIX - Two Phoenix officers shot and wounded a 29-year-old man after he reached for a gun in his waistband during an encounter outside a home, the Police Department said Friday.

Details of the man’s wounds and his identity weren’t released but a police statement said he was seriously injured and hospitalized in stable condition.

The incident occurred Thursday night when the officers responded to a caller’s report of shots fired and loud music at a residence, the statement said.

The officers saw the man was shirtless and had a handgun tucked into his waistband, and they shot him as he reached for the gun, the statement said.

No officers were injured.

MESA - A suspect in a hit-and-run crash that killed a pedestrian earlier this week in Mesa has been arrested, according to police.

They said 45-year-old Joseph Eckert was booked into a Phoenix jail Thursday on suspicion of failing to stop for a fatal collision.

He’s accused of running over 81-year-old Larry Lans on Tuesday as the victim was walking on a sidewalk.

Police said the truck Eckert was driving left the roadway and drove onto the sidewalk and struck Lans along with a water meter valve and an electrical box.

After the crash, police said Eckert fled in the truck.

Investigators found surveillance footage that identified the vehicle and license plate number and that eventually led them to Eckert.

Police said Eckert has no knowledge of hitting a person. It’s unclear if Eckert has a lawyer yet who can speak on his behalf.