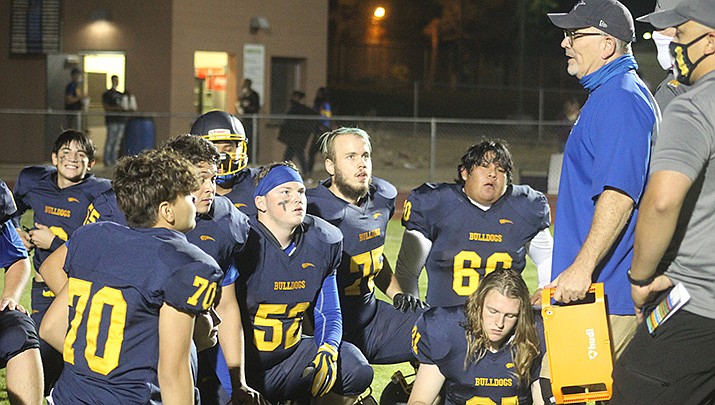 KINGMAN – The scoreboard was broken, their head coach was out with health issues, and their opener had been delayed for a month by a pandemic.

At least one thing went right for the Kingman High School football team on Friday, Oct. 2. They managed to hold off Kingman Academy to post a 16-10 win.

It didn’t come easy. It took a pair of takeaways at the goal line in the fourth quarter to preserve the win.

Garrett Stryker intercepted an Isaac Carter pass at the goal line to thwart a Kingman Academy drive, then Christian Torch smothered a fumble at the Kingman seven-yard line to halt another drive with just minutes to play.

“We have a stable of running backs; we’re a running team. Pound the rock between the tackles,” said Kingman coach Randy Cheatheam, who was filling in for head coach Russ Stryker.

For Kingman Academy, it was a game of attrition. Senior quarterback Charlie Anderson, who was 9-for-13 for 99 yards passing and added 83 yards on the ground, was cramping up in the fourth quarter. When backup quarterback Isaac Carter went down, wide receiver Al Blanton moved under center. “He’d never taken any snaps before,” Morgando said.

While the Tigers will dress 22 players when healthy, they were down seven by game’s end.

“Ultimately, we played with 15 guys, six of them freshmen,” Morgando said. “They obviously had the depth on us.”

Let the record note that the Bulldogs scored on their first offensive possession of the season, traveling 73 yards in 11 plays, all on the ground. Ray Carter cashed in from 4 yards out. Williams-Garcia rushed for the two-point conversion to give Kingman an 8-0 lead.

Kingman Academy answered in the second stanza, with Anderson completing four straight passes for 45 yards, and rushing the final nine yards for the score. His extra point narrowed the Kingman lead to 8-7.

Anderson gave the Tigers the lead at halftime when he connected on a 37-yard field goal that easily cleared the uprights.

Kingman struck quickly in the third quarter, with Rivera ripping off a 58-yard touchdown run on just the fourth play of the half. Bell ran for the two-point conversion.

And the defense made it hold up, overcoming a night plagued by bad snaps, fumbles and costly penalties.

“Our mistakes gave them confidence; it kept them in the game,” Cheatheam said. “But we didn’t quit. We did what it took to win.”

Count it as a step in the right direction for a Kingman program that has struggled.

“We’re trying to change the culture here,” Cheatheam said. “We’re not here to just show up and play. We’re coming to win.”

Kingman travels to play Chino Valley on Friday, Oct. 9, while Kingman Academy will host River Valley at Southside Park in Kingman on Oct. 9.

Fans will not be allowed to attend the Kingman at Chino Valley game due to coronavirus restrictions.