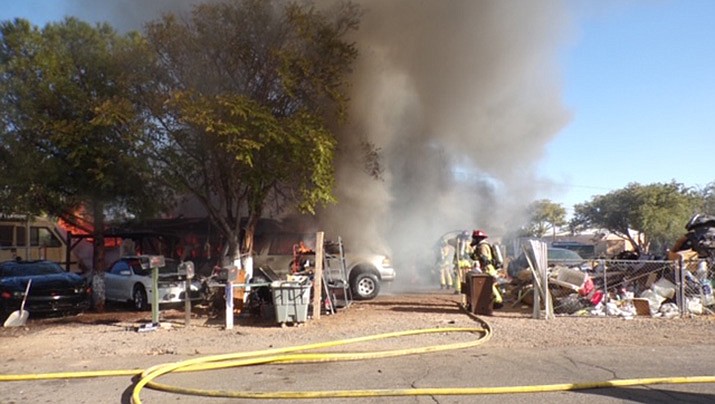 Firefighters from the Kingman Fire Department and the Northern Arizona Consolidated Fire District battle a structure fire in the 3900 block of Ryan Avenue on Tuesday, Oct. 6. (KFD courtesy photo)

KINGMAN – Four engines and three battalion chiefs from the Northern Arizona Consolidated Fire District and Kingman Fire Department were able to keep a residential structure fire in the 3900 block of Ryan Avenue from spreading to neighboring residences on Tuesday, Oct. 6.

Units were dispatched to the incident at approximately 8:40 a.m., and arrived to find a small, doublewide mobile home heavily involved with fire. The fire also threated two additional residences, according to a KFD news release.

Firefighters were able to extinguish the fire in the structure, and protected the neighboring residences from any fire damage. The home was occupied by four residents at the time, and all escape without injury. The cause of the fire is currently undetermined, as the structure did not have electric or gas service. There were no witness to the start of the fire, according to KFD.