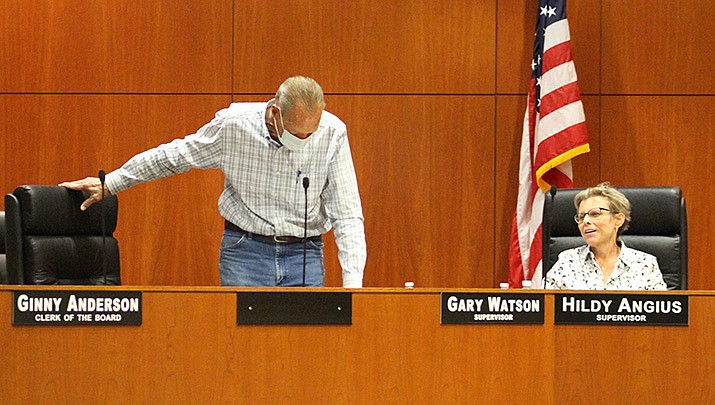 Supervisor Gary Watson of District 1 and Supervisor Hildy Angius of District 2 at the Mohave County Board of Supervisors’ meeting on Thursday, Oct. 1 (Photo by Agata Popeda/Kingman Miner)

KINGMAN – A motion to rescind the public health emergency declaration in place since March 19 in Mohave County failed on Thursday, Oct. 8.

The effort, initiated by Supervisor Hildy Angius of District 2 and Supervisor Ron Gould of District 5, was defeated 3-2. The declaration that applies to the unincorporated areas of Mohave County will remain in place.

After confirming that rescinding the declaration would not force Mohave County to return coronavirus-related financial aid from the federal government and the state, Angius made a motion and got a “second” from Gould.

Supervisor Buster Johnson of District 3 said he would join the duo if they agreed to amend their motion and vote to return over $9 million in aid from the CARES Act.

“Amend it and I’ll support it,” he said.

Angius refused and then Johnson made a case that calling off the emergency and keeping emergency funds is “disingenuous.” He reminded the board that U.S. President Donald Trump keeps the state of emergency in place, and said that Mohave County should follow suit.

Supervisor Gary Watson of District 1 asked about the mask requirement in county buildings after the emergency is called off.

Deputy County Attorney Ryan Esplin agreed that in such a case, after rescinding the declaration, there would be “no justification” for asking people to wear face coverings in county facilities.

“I’m concerned we would be sending a wrong message,” Esplin said about the attempt to change the current emergency status.

Both Angius and Gould argued that with their motion they were not trying to claim there is no health problem in the community, but that people in Mohave County have a right to choose how they want to protect themselves.

Gould said for him this is a matter of one person – the chairman of the board of supervisors – having too much power in the emergency, and too much ability to make unilateral decisions.

Chairwoman Jean Bishop of District 4 pointed out that, as chair, she hasn’t made any snap decisions on her own.

The motion didn’t pass and the emergency is still declared for unincorporated areas of Mohave County.