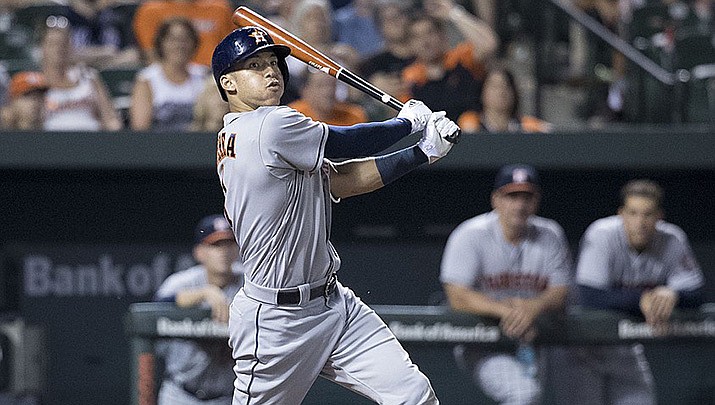 Carlos Correa’s three-run homer sparked the Houston Astros to an 11-6 win over the Oakland Athletics on Thursday, Oct. 8. The win sends the Astros to the American League Champions Series, where they’ll face the winner of the series between the New York Yankees and the Tampa Bay Rays. (Photo by Keith Allison, cc-by-sa-2.0, https://bit.ly/3nt8hfX)

Correa drove in five as the Astros — October villains to many a year after their sign-stealing scandal was exposed — advanced to the AL Championship Series for the fourth consecutive season. It will be their first ALCS under Dusty Baker, their 71-year-old manager. Baker earned his first closeout win since the 2003 NL Division Series and improved to 4-13 in closeouts.

Houston will play either the New York Yankees or Tampa Bay Rays in the best-of-seven ALCS in San Diego. The Rays lead their ALDS 2-1.

The Astros and A’s combined for 24 homers — 12 each — the most in a postseason series of five games or fewer.

Houston clinched at Dodger Stadium, where it won the 2017 World Series in seven games. The Astros’ sign-stealing scheme used during their title run was revealed last year by former teammate and current A’s pitcher Mike Fiers, who didn’t pitch in this series.

ARLINGTON, Texas - Justin Turner put the Dodgers ahead with a record-breaking hit in a big inning fueled by a nice stop-gone-bad by Fernando Tatis Jr., and Los Angeles closed out a three-game NL Division Series sweep.

Will Smith set a Dodgers postseason record with five hits, and Joc Pederson had a two-run single to cap that decisive five-run third as Los Angeles advanced to its fourth NL Championship Series in five years.

Turner’s RBI single made it 3-2 and was his 64th career postseason hit, breaking a tie with Steve Garvey for the most in Dodgers postseason history. That came right after Tatis, the 21-year-old budding superstar, made a diving play on Corey Seager’s hard grounder, but then tried to make a throw from his knee. The ball skipped along the dirt and past first baseman Eric Hosmer, allowing Mookie Betts to score the tying run.

Los Angeles will stay in Arlington to open the best-of-seven NLCS on Monday against Atlanta with fans in attendance for the first time during this pandemic-altered season. The World Series will also be played in the Texas Rangers’ new $1.2 billion stadium with the retractable roof.

Julio Urias (2-0), the third Dodgers pitcher, struck out six, walked one and allowed an unearned run over his five innings.

Only four pitchers had ever been younger when starting a potential elimination game than Padres lefty Adrian Morejon (0-1) at 21 years and 224 days old. He allowed three runs.

The Yankees bounced back from two straight losses against their AL East rivals to set up an expected showdown between aces Gerrit Cole of New York and Tyler Glasnow of Tampa Bay on Friday night.

The Game 5 winner will remain in San Diego to face the Houston Astros in the AL Championship Series starting Sunday night.

Opener Ryan Thompson took the loss. He was chased after allowing DJ LeMahieu’s sacrifice fly for the second out of the second inning.

HOUSTON - Rookie Kyle Wright dazzled for six innings in his postseason debut, and Atlanta rode its superb pitching to beat Miami for a three-game sweep and its first trip to the NL Championship Series since 2001.

Atlanta had lost eight straight Division Series, including in each of the previous two seasons, before outscoring the Marlins 18-5, including 11-0 in the final two games. The Braves are 5-0 with a 0.92 ERA in the postseason, allowing five runs in 49 innings.

They will play the Los Angeles Dodgers or San Diego in the NLCS starting Monday in Arlington, Texas.

Wright (1-0) was sharp despite not pitching since Sept. 25, allowing three hits and walking two with a career-high seven strikeouts. A.J. Minter, Jacob Webb and Shane Greene finished the five-hitter to give the Braves four shutouts in five playoff games.