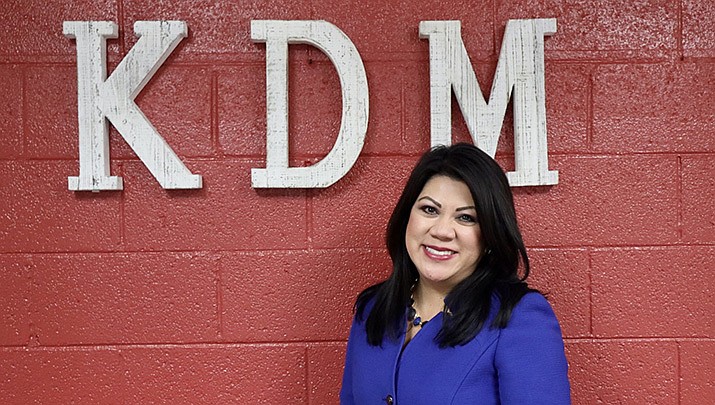 Arizona Treasurer Kimberly Yee poses for a photo during a visit to the Kingman Miner office on Monday, Oct. 6. (Photo by Hannah Roehr/Office of the State Treasurer of Arizona)

KINGMAN – This year has been a unique year, not only for Arizona, but for the rest of the country, according to Arizona Treasurer Kimberly Yee, who visited Kingman and the Miner headquarters on Monday, Oct. 5 to discuss the state and county’s finances.

“Arizona came in so strong economically at the beginning of 2020,” said Yee, who manages the state's investment portfolio, directs the state's banking services and balances the state's accounts.

“We had the third best GDP in the nation so we will likely come back stronger and faster than many other states,” the treasurer continued.

Even without the COVID-19 federal aid, the state saw a 65% increase in tax revenues.

“Our revenues had gone up. It’s amazing, isn’t it,” Yee exclaimed. “It seems that people have maintained a certain level of financial security even when working from home. They are still spending, it shows.”

Starting on the really good footing early this year is one of the reasons the state is in good shape. Another is, according to Yee, that “Arizona didn’t shut down entirely as other states continue to do.”

Mohave County along with other rural parts of Arizona didn’t close completely, or reopened quicker, Yee said. That resulted in an influx of new people and new spenders from other states, she said, especially from California and Nevada, “places with significant shutdowns,” Yee said.

Some of them came to Mohave County to vacation and ended up buying a house. Mohave and Yavapai are the counties with the biggest number of transplants this year.

“The local housing market is right up there,” Yee said.

Yee is also in charge of local governments’ investment portfolios and those are also doing great, she said.

“When it comes to the local government investment pool,” Yee said, “our assets have gone up double digits.”

That’s the money that comes from the county’s tax revenues that are being invested in fixed-income and equity products and later on comes back to the local government.

Yee also came to Kingman to promote a new “college savings” program that was taken over by the treasurer, rebranded and reactivated.

“It’s a wonderful program for parents and grandparents who have some money to invest,” Yee said. “It’s a savings program and they gain interest over the years, while receiving tax breaks.”