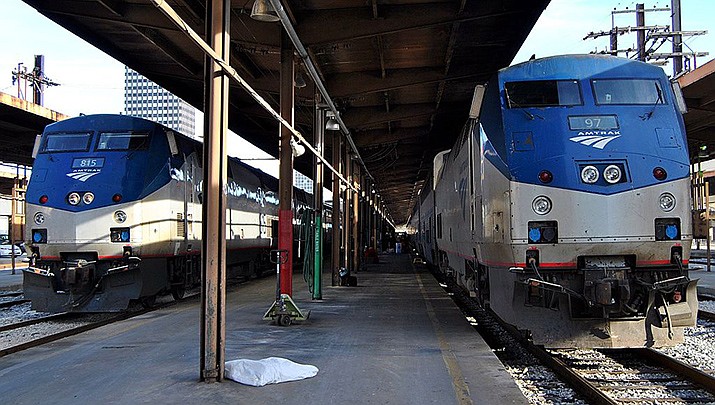 The FBI is reminding the public that a large reward is available for anyone with information leading to arrests in the 1995 crash of the Sunset Limited passenger train in the Arizona desert due to sabotaged railroad tracks. The Sunset Limited is shown above in 2012. (Photo by Steve Wilson, cc-by-sa-2.0, https://bit.ly/36SBmM0)

PHOENIX - The FBI is reminding the public that a hefty reward remains on the table a quarter-century after someone sabotaged railroad tracks in the Arizona desert, resulting in the deadly derailment of an Amtrak passenger train.

Friday was the 25th anniversary of the Oct. 9, 1995, derailment of a Sunset Limited train in a remote area southwest of Phoenix. The train conductor was killed and 100 people hurt, including 12 who were seriously injured.

Rewards offered by the FBI, Amtrak and the Maricopa County Attorney's Office for information leading to arrest and conviction total up to $310,000.

“A hallmark of the FBI is that we don’t forget,” said Sean Kaul, special agent in charge of the FBI Phoenix Field Office. “There were children onboard the train as young as 9 months old, an innocent man lost his life, and many others were injured. For 25 years the victims of this crime, their family, and friends have suffered. We will continue to aggressively pursue this investigation, for as long as it takes. We are determined to seek justice for the victims of this senseless crime.”

PHOENIX - The Arizona Supreme Court ruled Friday that it’s not unconstitutional for a juvenile criminal defendant convicted of multiple crimes to be sentenced to what amounts to an aggregate prison sentence beyond life expectancy.

Lawyers for the juvenile inmates in the Arizona cases decided Friday argued that their clients received de facto life sentences violating the Eighth Amendment’s prohibition against cruel and unusual punishment.

However, the state high court ruled that the three inmates’ lengthy aggragate sentences are allowed because they stem from multiple crimes and because the U.S. Supreme Court hasn’t addressed the impact of consecutive sentences imposed for separate crimes.

The ruling upheld sentences for Martin Raul Soto-Fong and Wade Clay, both convicted of murder and other crimes, and for Mark Kasic, convicted of arson and attempted arson.

WINDOW ROCK - Enrolled members of the Navajo Nation will be eligible for payments of up to $1,500 as part of the tribe’s response to the coronavirus.

Adults will be eligible for payments of $1,500 while those younger than 18 on March 1 are eligible for $500. Nez said in a statement that there isn’t enough funding to cover payments for all of the more than 320,000 enrolled members of the tribe, so the money should be directed to elders and those most in need.

Nez and Lizer also approved $90 million for tribal chapters, and Nez said there may be a chance to pump more money into the relief payments if the chapters don’t spend all of that money by the end of the year.

The controller’s office will develop an application process to distribute funds.

The Navajo Department of Health on Friday reported 42 new coronavirus cases and one more death. The death toll now stands at 564 since the pandemic began.