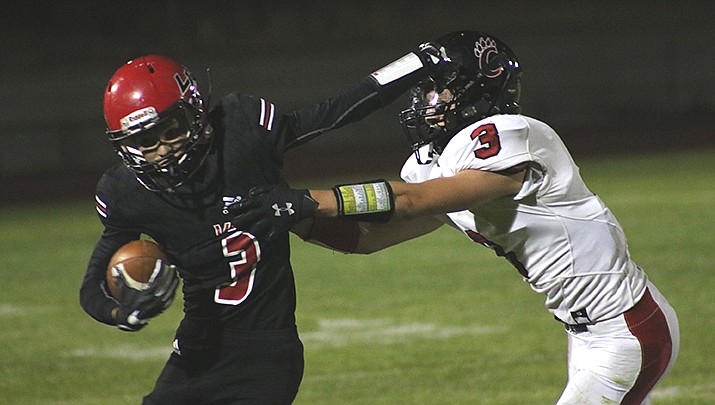 KINGMAN – Lee Williams gave Coconino a run for its money on Friday, Oct. 9, but even though the Volunteers were able to come back from a 13-point halftime deficit to take the lead in the fourth quarter, the Panthers came out on top 28-21.

Defensive battles were the theme of the first quarter, with the lone touchdown tallied by the Panthers. However, a mixed extra point positioned the Volunteers to take the lead in the event they were able to drive down the field and score a touchdown of their own and capitalize on the extra point.

Lee Williams was almost successful, driving the ball all the way to the Coconino goal line. However, they were stopped on fourth and goal.

The first drive of the second quarter ended with Coconino punting, and the second with the Volunteers punting. The Panthers fumbled that second punt and Lee Williams recovered, positioning them on the right side of the 50-yard line.

A pass interference call got the Volunteers even closer to the end zone, at which time junior quarterback Devean Santos connected with senior wide receiver Kameron Toms for an approximate 26-yard touchdown. The extra point put the Volunteers up by one with four minutes left in the first half.

But the Panthers responded, dropping another seven points with just 26 seconds left in the half to put the Volunteers down 13-7 going into the locker room.

Coconino was also first to put points on the board in the second half and scored after Lee Williams was forced to punt on the opening drive of the third quarter. Down 20-7 and getting the ball with three minutes left in the third quarter, senior running back James Garcia broke off a big run from near midfield and down the visiting team’s sideline for another Volunteers touchdown.

However, that still left Lee Williams down by six points, 20-14, with only one minute left in the third.

Despite Coconino converting on a third and 25 from near their own goal line on the next drive, Lee Williams was able to force a turnover on downs on their own 22. However, that drive ended before long thanks to a fumble, which was recovered by the Panthers. It didn’t take long for the favor to be returned, as Lee Williams then recovered a Coconino fumble and was positioned within their opponent’s 20-yard line.

Senior wide receiver Angel Larios then snagged a pass and took it to the house, giving the Volunteers their first lead 21-20.

But the Panthers responded by tallying another six points, and a two-point conversion, with less than eight minutes left in the game. The Volunteers weren’t able to return to the end zone, resulting in a final score of 28-21 and the first loss of the season for Lee Williams.

“I was very proud of the way our kids competed,” said Volunteers head coach Patrick O’Boyle after the game. “Coconino is a very, very good football team, well-coached, you have to give them credit. They did everything they were supposed to do. The ball just didn’t bounce our way a few times tonight. But again, I’m very, very proud of the way our guys competed. We never gave up and always had a chance to win the game against a very good football team.”

Moving into practice Monday, O’Boyle said discipline will be a point of focus in an effort to combat penalties and big plays.

“Their kids competed hard, our kids competed hard, they just had a few more big plays than we did tonight,” the coach said. “That’s just the way it goes sometimes, and unfortunately for us we came out on the wrong end. But, again, very, very proud of the way we competed tonight and we’re going to get better from this.”