Biden on high court packing: ‘I’m not a fan’ 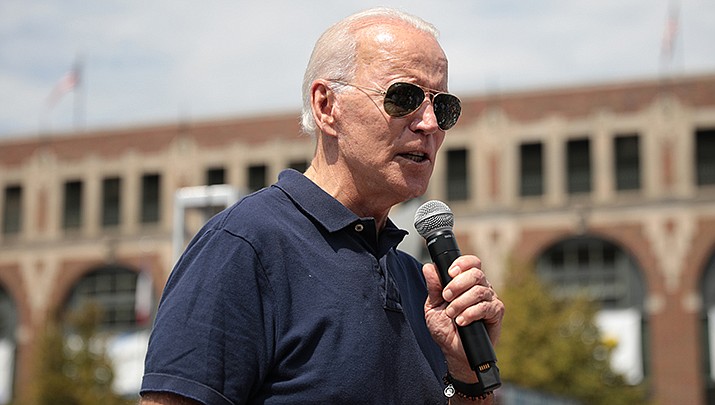 After avoiding questions about a proposal by some Democrats to add seats to the U.S. Supreme Court, Democratic presidential candidate Joe Biden said Tuesday, Oct. 13 that he is “not a fan” of the practice. (Photo by Gage Skidmore, cc-by-sa-2.0, https://bit.ly/3lKpPTc)

WASHINGTON – Joe Biden says he is “not a fan” of adding seats to the Supreme Court, after weeks of avoiding questions about the idea that’s been pushed by progressives and used by Republicans to attack him.

“I’ve already spoken on – I’m not a fan of court packing, but I don’t want to get off on that whole issue. I want to keep focused,” the Democratic presidential nominee said in an interview Monday with Cincinnati’s WKRC.

Biden argued the focus should remain on President Donald Trump and Republicans’ efforts to push through Amy Coney Barrett as a replacement for Justice Ruth Bader Ginsburg before the Nov. 3 election. “That’s the court-packing the public should be focused on.”

Biden has expressed opposition to the idea of expanding the Supreme Court before, but in recent weeks notably dodged multiple questions from the media about the proposal, insisting he would answer the question after the election. Pressure on Biden to respond intensified after his running mate, California Sen. Kamala Harris, refused to answer the question during a debate with Vice President Mike Pence last week.

Harris, however, expressed support for court-packing during her primary bid for president, along with a number of other progressive candidates. Faced with the prospect of a decades-long conservative majority on the court following Ginsburg’s death, the idea of adding seats to the nine-person court has gained renewed traction among Democrats.

That has Biden caught between the conflicting pressures of appeasing his progressive base and appealing to more moderate and conservative voters that may be open to voting for Biden but reluctant to support such sweeping structural reforms to the court. Biden, who spent years as chairman of the Senate Judiciary Committee, expressed opposition to court-packing throughout the Democratic primary.

“I’m not prepared to go on and try to pack the court, because we’ll live to rue that day,” he told an Iowa political blogger last summer.

In dodging the question in recent weeks, Biden has argued that the proposal is a distraction from GOP efforts to push through Ginsburg's replacement. But Republicans have seized on Biden's refusal to answer as evidence he would be beholden to the Left on the issue if elected.

“Biden evades “Court Packing” question. @FoxNews Because his puppet masters are willing to destroy the U.S. Supreme Court. Don’t let this, and so many other really bad things, happen. VOTE!” Trump tweeted earlier this week.