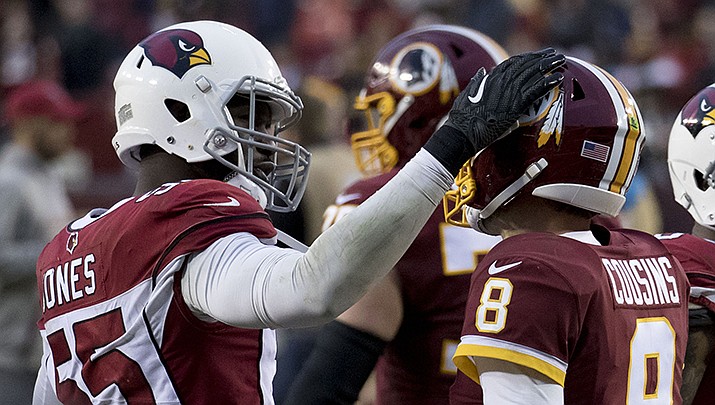 TEMPE, Ariz. - Arizona Cardinals All-Pro linebacker Chandler Jones is out for the season because of a biceps injury that requires surgery.

An MRI earlier this week confirmed the extent of the injury, which happened during the first half of Arizona's 30-10 win over the New York Jets on Sunday, and coach Kliff Kingsbury said Wednesday that Jones has elected to have the season-ending surgery. The recovery time is expected to be 3-to-4 months.

It's a huge blow for the Cardinals' defense, which has improved after giving up the most total yards in the NFL last season. Jones had a career-high 19 sacks in 2019. He only had one sack this season while frequently drawing double-teams from opposing blockers.

Kingsbury said the team would need a collective effort to replace Jones. Candidates include Hasson Reddick, rookie Isaiah Simmons and backup Dennis Gardeck, who had his first two sacks against the Jets after Jones was hurt.

“He's a tremendous player as we all know. Great person, great leader on this team, so it's not going to be easy,” Kingsbury said. “But we've got guys who have seen playing time this year and will continue to play and get more. It'll be a rotation, guys we've seen out there we'll just see out there more.”