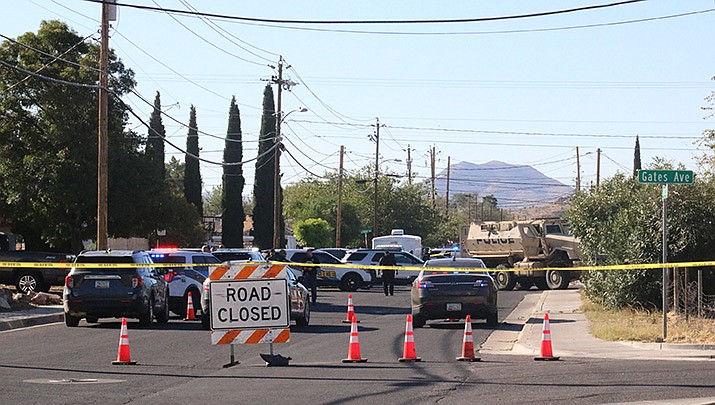 A subject died during a standoff with local law enforcement in the in the early hours of Wednesday, Oct. 14 in the 2000 block of Fairgrounds Boulevard. The above photo shows where police cordoned off the scene. (Photo by Travis Rains/Kingman Miner)

KINGMAN – A Kingman Police Department officer has been placed on administrative leave after being involved in a shooting at approximately 5:30 a.m. Wednesday, Oct. 14 at a home in the 2000 block of Fairgrounds Boulevard.

The Kingman Police Department wrote in a news release that at about 2:15 a.m. officers responded to the residence after receiving a 911 report that a man in the home was shooting at neighboring homes. Officers arrived and surrounded the residence, and began to communicate with the subject.

Officers used a public address system to instruct the subject to exit the residence unarmed. KPD wrote that the subject continued to be verbally aggressive, uncooperative and confrontational for a period of two hours, in addition to firing at officers from inside the home.

KPD requested the SWAT team from the Lake Havasu City Police Department, which subsequently entered the home at about 8:15 a.m. to discover the suspect deceased. It is unknown if the suspect died from a self-inflicted gunshot or as a result of the officer’s actions, according to law enforcement.

Per standard protocol, the involved officer, who has served with KPD for six years, has been placed on administrative leave. The Mohave County Sheriff’s Office will handle the investigation.