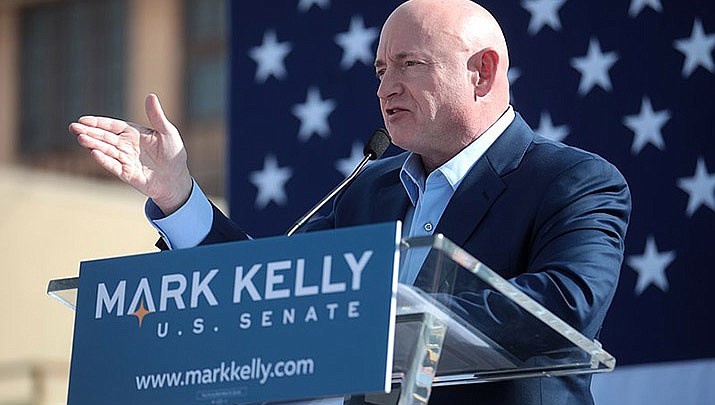 Kelly's campaign announced Thursday that he ended September with about $19 million in the bank for the final month of the campaign for a seat in the U.S. Senate.

Republican Sen. Martha McSally has not yet reported her latest fundraising figures.

Kelly's fundraising was driven in part by a surge in donations following the death of Supreme Court Justice Ruth Bader Ginsburg, which spurred Democrats around the country to flood competitive Senate races with cash.

Kelly's latest haul brings his total raised since the start of the campaign to $83 million.

Two years ago, McSally and Democrat Kyrsten Sinema spent a combined $45 million during the entire campaign for Arizona's other Senate seat.

PHOENIX - A high school in southern Arizona closed Thursday after at least three people tested positive for the coronavirus, sending hundreds into quarantine.

Combs High School in San Tan Valley will be closed until Oct. 27, school officials said. About 450 students and 20 staff members were told to quarantine while the larger school district investigates what is considered an outbreak.

The Pinal County Public Health Department ordered the school’s closure because of the number of people who are required to quarantine, not the number of positive cases, school officials said.

Those who tested positive were last on the high school campus Tuesday. Students will do virtual learning while in-person classes are on hold.

The district had planned to open in mid-August for in-person learning but pushed back the date after teachers protested over health and safety concerns.

TUCSON - Eight cactuses at Saguaro National Park’s west district in Tucson have been slashed or cut down in an act of vandalism, according to park rangers.

They said the slow-growing cactuses were damaged around Oct. 3 and left along the Scenic Trail.

The saguaros ranged in height from 1-10 feet.

Rangers would like to hear from anyone who visited the Scenic Trail, Passey Loop Trails or the Scenic Drive Trailhead around Oct. 3 and might have information about the incident.

Program that provides coal to Navajos for heating resumes

FARMINGTON, N.M. - A program that provides free coal to Navajos to heat their homes is starting up later this month.

Many Navajos still use coal as a heating source, but accessing it became harder after a coal-fired power plant and its supply mine in northeastern Arizona shut down last year.

The only coal mine still operating on the reservation is the Navajo Mine in northwestern New Mexico. Its owner, the Navajo Transitional Energy Company, expanded its coal resource program to help fill the gaps.

Each of the Navajo Nation’s 110 chapters across Arizona, New Mexico and Utah can request tickets for coal on behalf of community members. Navajos have to pick up the coal themselves from the Navajo Mine outside Farmington, New Mexico. One ticket equals one ton of coal.

Officials from the Navajo Transitional Energy Company say they’ll load the coal into vehicles to ensure safety during the coronavirus pandemic. The pickups are available Wednesday through Friday, starting Oct. 28.

LAVEEN - The body of an elderly man has been found after a fire Wednesday night at a mobile home in Laveen, authorities said.

The Maricopa County Sheriff’s Office will handle the investigation to determine how the fire started.

Witnesses called 911 after seeing fire and smoke coming from the mobile home.

Fire crews were able to put out the flames and keep the blaze from spreading to other mobile homes before a search led to the body discovery.

PHOENIX - The temperature in Phoenix has hit 100 degrees, breaking the record for the most days of triple-digit heat in a calendar year.

National Weather Service meteorologists confirmed Phoenix reached 100-degree heat shortly after 2:30 p.m. Wednesday, making it the 144th day of 100 degrees or higher. This breaks the record of 143 days in 1989.

Phoenix has already set several weather records this year with 50 days of 110-degree heat and the hottest August ever since tracking began in 1896.

Arizona and California had their warmest April-September period in 126 years, according to the U.S. Drought Monitor. For Arizona, that six-month interval was the state’s driest period ever.

PHOENIX - An Arizona lawmaker who was critically ill with COVID-19 has been released from a hospital, his wife announced Wednesday.

Democratic Rep. Lorenzo Sierra of Avondale will recover for a few days in the Washington area before returning to Arizona, his wife, Rhonda Cagle, posted on Twitter. “(Sierra) has made nothing short of a miraculous recovery. We are so grateful!” Cagle wrote alongside a photo of the couple smiling in a vehicle.

Sierra spent several days on a ventilator in an intensive care unit at Johns Hopkins Hospital in Baltimore last week. Sierra and Cagle were visiting relatives in the Washington area when both became sick with the coronavirus.