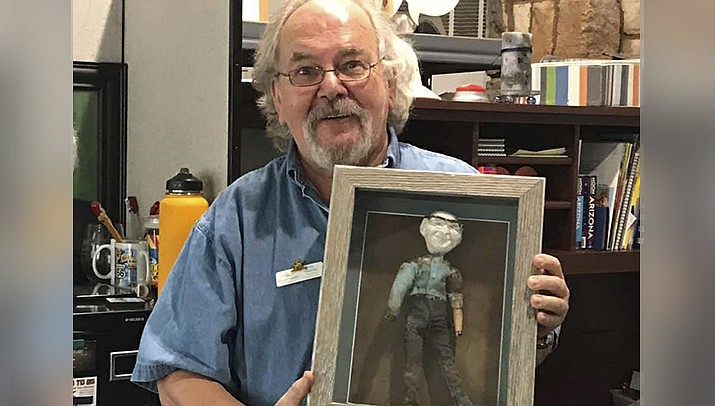 Jan Cassies, director of the Lake Havasu Visitor Center, poses with a doll that was buried for nearly 50 years inside the landmark London Bridge in Lake Havasu City. (Photo by Brandon Messick/For the Miner)

In 2018, a doll made in the likeness of a local journalist was discovered under a concrete slab and tourism officials are still unsure what to do with it, the Today's News-Herald reported.

The bridge was sold by the British government in 1968 to Robert P. McCullouch, the founder of Lake Havasu City. At the time, the City of London wanted to replace the bridge because it was unfit to withstand traffic. It was dismantled, transported to Lake Havasu and reassembled over a three-year period.

Before its completion, Jack Hardie, a beloved newspaper columnist at the Lake Havasu City Herald, made a bet with an engineer for the British company building the bridge. According to a 1971 Herald article, Hardie wagered Bob Beresford a bottle of scotch that crews would not finish the bridge by Aug. 31 that year.

By September, one section of bridge railing was still missing.

“Should you choose to gloat in public, I hope you will make it clear to your admirers that you are claiming a technical victory on the basis of four stones missing out of a total placed of 10,276,” Beresford reportedly said.

Hardie must have gloated because a newspaper photo from October 1971 shows Beresford and several others sticking pins in a “voodoo doll” meant to look like Hardie down to the horn-rimmed glasses.

Beresford reportedly said while he wanted his friend “immortalized in the deepest bowels of the bridge” for “his ridiculous crying” about winning the bet.

Forty-seven years later, maintenance workers on the bridge unearthed a coffee can holding the doll within the structure's western facade. The stone hiding the doll was etched with the names of five of the bridge's builders and the words “Here lies Jack Hardie.”

The bespectacled doll now resides in a display case at the Lake Havasu Visitor Center. Jan Cassies, the center's director, has declined offers from businesses to put up the doll. Cassies wants to showcase the doll there once he figures out an appropriate place.