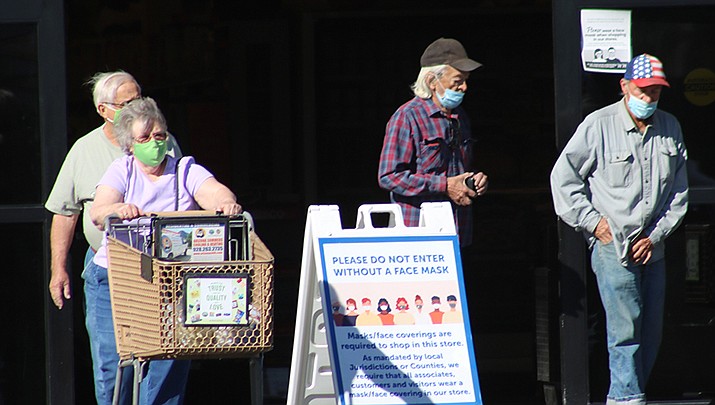 Kingman City Council will decide how to proceed with the city’s mask proclamation at its Tuesday, Oct. 20 meeting. Customers are shown exiting the Safeway grocery store at 3125 Stockton Hill Road in Kingman on Friday, Oct. 16. (Photo by Travis Rains/Kingman Miner)

KINGMAN – Just over a month has passed since Kingman City Council voted 5-2 to keep Mayor Jen Miles’ mask proclamation in effect until Tuesday, Oct. 20. Now that the date in question approaches, councilmembers are set to revisit the issue that seems to have divided Kingman.

The original proclamation requiring that persons over the age of 6 wear face coverings when entering places of businesses in Kingman went into effect Wednesday, July 1, and was extended through the month of August. Then in September, the mayor extended the proclamation through 2020, citing the dangers posed by the oncoming flu season combined with the impacts of COVID-19, along with other considerations such as schools reopening.

Those residents who were of the opinion that the mayor’s original proclamation expired after 72 hours per Kingman Municipal Code were less than thrilled about the prospect of a months-long extension of the proclamation. And while others have come to the mayor’s defense thanking her and councilmembers who voted alongside her for doing what they can to curb the spread of the virus and protect the community, some falling into the former group have started a recall effort for the mayor as they believe she has overstepped her authority.

However, the argument that the mayor’s proclamation held no weight due to its purportedly expired status after 72 hours was seemingly put to bed in September. Kingman City Council voted at its Sept. 15 meeting to ratify the proclamation by a vote of 5-2, with Vice Mayor Travis Lingenfelter and Councilwoman Deana Nelson casting the dissenting votes.

But rather than keep the proclamation in place until 2021, council decided to reevaluate its decision after a month.

“We talk every week with the health department, but we also get the daily reports they put out,” Miles explained. “The numbers look really good; I’m so pleased with the low numbers that Kingman is having.”

There were 13 new cases in the Kingman medical service area between Saturday, Oct. 10 and Friday, Oct. 16. There have been 547 cases reported in the City of Kingman since the beginning of the pandemic.

“Also, we see that the virus does have a tendency to come back in certain areas,” Miles said. “We’ve seen that in parts of this country, we’re seeing that in Europe. And I’m very thankful it shows no signs of it here, but again, I prefer to use discretion as the better part of valor in this.”

Bullhead and Lake Havasu cities have both rescinded their mask mandates, and Miles said she is appreciative that the COVID-19 numbers in those cities are low, and hopes it stays that way. However, she said her position on Kingman’s proclamation will stand. One reason for her decision is the livelihoods of Kingman businesses, she said. Miles noted the benefits of having a “cohesive and consistent policy throughout the city,” that matches the face-covering policies of businesses within the city.

“One other thing I feel really strongly about is my real understanding that wearing masks makes a difference in keeping the numbers low and that helps our businesses stay open,” Miles said. “I would like to see the businesses fully open and staying open, and each one of us can help by doing our part to keep this virus contained.”

While the proclamation’s consideration in September was paired with a number of presentations from health care providers as well as the Mohave County Department of Public Health, Tuesday’s meeting will primarily see councilmembers discuss the issue without additional presentations.

“I think at this point, every person on the council has had plenty of time and opportunity to review data and receive input from the community,” Miles said. “And each person will draw their conclusions based on that. We’ll just see if the majority of council is wanting to keep it or not, and I hope they do.”