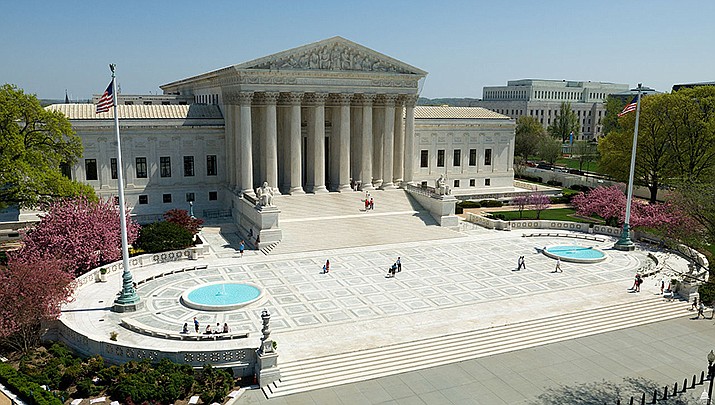 The U.S. Supreme Court on Monday, Oct. 19 divided 4-4 on a ballot issue from Pennsyvlania, which means a lower court ruling stands requiring Pennsylvania election officials to count ballots received through Friday, Nov. 6. (Photo by the Architect of the Capitol office/Public domain)

WASHINGTON - The Supreme Court will allow Pennsylvania to count mailed-in ballots received up to three days after the Nov. 3 election, rejecting a Republican plea in the presidential battleground state.

The justices divided 4-4 on Monday, an outcome that upholds a state Supreme Court ruling that required county election officials to receive and count mailed-in ballots that arrive up until Nov. 6, even if they don't have a clear postmark, as long as there is not proof it was mailed after the polls closed.

Republicans, including President Donald Trump’s campaign, have opposed such an extension, arguing it violates federal law that sets Election Day as the first Tuesday after the first Monday in November and that such a decision constitutionally belongs to lawmakers, not the courts.

The state Republican Party chairman, Lawrence Tabas, said the party disagrees with the decision and, noting the 4-4 decision, “it only underscores the importance of having a full Supreme Court as soon as possible.”

Nancy Patton Mills, chairwoman of the Pennsylvania Democratic Party, accused Republicans of trying to sow confusion and disenfranchise eligible voters. “This is a significant victory for Pennsylvania voters,” Mills said.

Chief Justice John Roberts joined with the three liberal justices to reject Pennsylvania Republicans’ call for the court to block the state court ruling. Justices Samuel Alito, Neil Gorsuch, Brett Kavanaugh and Clarence Thomas would have required the state to stop accepting absentee ballots when the polls close on Nov. 3.

Senate to work through weekend to vote Barrett onto court

WASHINGTON - Wasting no time, the Senate is on track to confirm Judge Amy Coney Barrett to the Supreme Court by next Monday, charging toward a rare weekend session as Republicans push past procedural steps to install President Donald Trump’s pick before Election Day.

Senate Majority Leader Mitch McConnell said he will begin the process as soon as the Senate Judiciary Committee wraps up its work Thursday. With a 53-47 Republican majority, and just two GOP senators opposed, Trump’s nominee is on a glide path to confirmation that will seal a conservative hold on the court for years to come.

McConnell said Monday that Barrett demonstrated over several days of public hearings the “sheer intellectual horsepower that the American people deserve to have on the Supreme Court.”

Without the votes to stop Barrett’s ascent, Democrats have few options left. They are searching for two more GOP senators to break ranks and halt confirmation, but that seems unlikely. Never before as a court nominee been voted on so close to a presidential election.

Senate Democratic leader Chuck Schumer decried what he called the “farcical” process to “jam” through Trump’s choice, even as the coronavirus outbreak sidelined GOP senators.

“The Republican majority is running the most hypocritical, most partisan and least legitimate process in the history of Supreme Court confirmations,” he said during speech as the Senate opened.

The Senate Judiciary Committee is set to meet Thursday to vote on recommending Barrett’s nomination to the full Senate.

By Friday, procedural votes are expected, continuing over the weekend as Republicans push through the steps for a final vote to confirm Barrett as soon as Monday.

The 48-year-old appellate court judge from Indiana delivered few specific answers during several days of public testimony as senators probed her previously outspoken views against abortion, the Affordable Care Act and other issues before the court. She declined to say whether she would recuse herself from cases involving the election between Trump and Democrat Joe Biden.

Trump has said he wants the judge seated in time to hear any potential disputes from the Nov. 3 election. He also has said he’s looking for a judge who would rule against the Obama-era health care law, which is headed to the court in a case justices are expected to hear Nov. 10.

If confirmed, Barrett would be Trump’s third justice on the court. She would fill the vacancy from the late Ruth Bader Ginsberg, the liberal icon, locking in a 6-3 conservative majority on the high court.