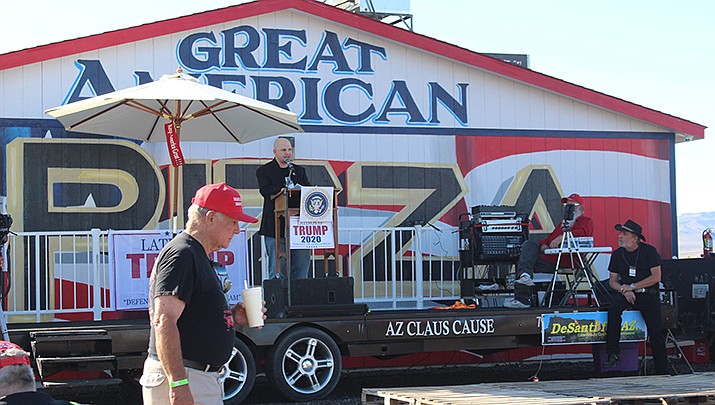 Owners Robert and Kathleen Hall announced on Facebook that “the (Mohave County Department of Public Health) had received an anonymous phone call that the staff was not wearing masks, and conducted a mandatory investigation.

“They visited three times and explained to us that they were enforcing a government mandate by the governor,” the Halls wrote. “We will not comply to the heavy hand of government; it is impossible for us to function and wear masks in our kitchen.”

After the owners declined to comply, they were told they would be fined $1,000 a day until they comply.

“We have chosen to close our restaurant and fight it,” the Halls wrote. “This is un-American, this is tyranny on our doorstep, and we recognize it for what it is.”

The Halls could not be reached for additonal comment and to explain how they planned to “fight” the mandate.

The matter was discussed – directly and regarding rules for county restaurants in general at the countys board of supervisors meeting on Monday, Oct. 26.

The Halls blamed Board Chairwoman Jean Bishop, and said she needs needs to remove the mandate, or be recalled and removed from office.

Bishop said that she has nothing against the pizzeria, reminded the audience that the county never forced the public to wear face coverings inside businesses in the county’s unincorporated areas, and that the rules for restaurant employees come from the executive order issued by Arizona Gov. Doug Ducey. The board enforced masks inside county buildings in order to protect its employees, she said.

Lenore Knudtson, an attorney for Mohave County, was present at the meeting and explained that inspections and enforcement of restaurants “was placed, not so gently, on the lap of public health officials,” who are obliged to take actions. The checklist they use during inspections comes from the governor’s office.

The Mohave County Department of Public Health investigated over 70 complaints involving restaurants, and no restaurant has been forced to close so far.

“One business chose to close, but not because of our actions,” Knudtson said, referring to Great American Pizza in mind.

“It’s a Herculean effort,” Knudtson said, adding the inspectors often work Saturdays, Sundays and holidays to stick to the timeline for initial and follow-up inspections.

While the county must enforce the governor’s COVID-19 safety measures on businesses, it can – and did – choose how to do so.

The lengthy, gradual system to encourage compliance is meant to help businesses comply and cooperate, focusing on educational efforts before slowly moving to fines and the courts.

Knudtson reminded that since safety procedures are in place, every business is treated the same, but “it is not discretionary for us to turn the blind eye” to violations. All complaints are investigated.

“What if we decided to not comply with the governor’s order,” asked Supervisor Hildy Angius of District 2, who fights on behalf of closed county businesses, such as bars.

“That would be uncharted territory,” Knudtson replied. “It remains to be tested.”

“To all you Great American Pizza lovers,” wrote the Halls on Facebook. “The closing of our restaurant has nothing to do with the Great American Freedom Rally we had,” referring to a political event they held on Oct. 23.