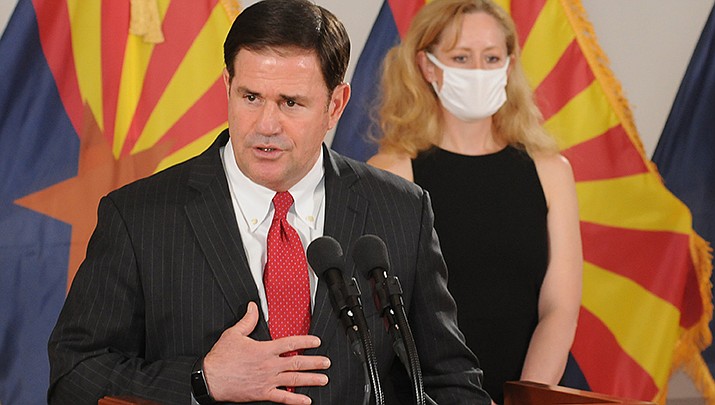 Free vaccines will be made available to people who are uninsured or underinsured, Ducey said, and the state will increase payments to health care providers who vaccinate people on Arizona's Medicaid plan in hopes of increasing availability of the vaccine.

But Ducey said he's worried that people will grow complacent about wearing masks, social distancing, handwashing and other steps to control spread of the coronavirus and the flu.

“It gets more difficult. It's just human nature, when you see the numbers trending lower and it's maybe not leading the nightly news every night,” Ducey said during a news conference. While Arizona's coronavirus situation is improving, “it doesn't mean it's behind us. It means we don’t know what’s next. That idea of staying vigilant and not letting our guard down is important.”

Arizona’s flu season generally lasts from October to March, with the peak of cases around February, said Dr. Cara Christ, head of the Arizona Department of Health Services. At times, hospitals already see their resources taxed from flu even without COVID-19, she said.

“As a public health professional, and as a physician and a mom, influenza is one of those things that scares me the most,” Christ said. “It can spread quickly, it can cause complications and in some cases it can be fatal.”

A flu shot can reduce the severity of symptoms, shorten the time during which a suck person is contagious and decrease the risk of hospitalization and death, she said.

After the first weekend that gyms, bars operating as restaurants and other businesses were allowed to reopen with mask mandates, limited capacity and other restrictions, Christ said the state has received about 800 complaints alleging businesses broke the rules. She said about a quarter of them were not valid and another quarter were for businesses not subject to health restrictions. Officials are reviewing the rest and prioritizing those with the biggest potential risks, she said.

Meanwhile, Ducey defended not wearing a mask when he was among a crowd of about 1,500 people who watched President Donald Trump accept the Republican nomination for president on the White House grounds last week. After posing for photos with a mask on, he was spotted by television cameras without one, despite touting the need for people to wear masks in public, practice social distancing and avoid crowds.

“When I’m indoors, I wear a mask. When I'm in a business, when I'm in a grocery store, when I'm in the office, when I'm anywhere inside that I can’t socially distance or it’s mandated, I’m wearing a mask,” Ducey said.

Arizona on Monday reported 174 newly confirmed cases of COVID-19 but no new deaths.

The state Department of Health Services said Monday that the number of cases total since the pandemic began stands at 201,835. The number of deaths remains 5,029 after officials realized a death had been counted twice.

In general, the number of coronavirus infections is thought to be higher because many people have not been tested. Studies suggest people can be infected without feeling sick.

For most people, COVID-19 causes mild or moderate symptoms that clear up in a few weeks. But for some, especially older adults and people with existing health problems, it can cause more severe illness, including pneumonia and death.