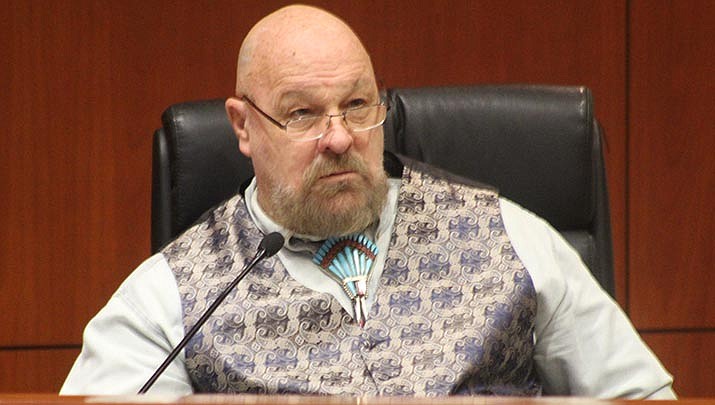 During a special meeting Thursday, Sept. 3 Supervisor Gary Watson said he wanted Public Health Director Denise Burley to exercise the authority given to her by Gov. Doug Ducey via an executive order to treat businesses in violation of the new coronavirus precautions as a public health nuisance.

Supervisor Buster Johnson suggested a tighter timeline for follow-up inspections, rather than giving non-compliant restaurants three days between visits to comply. The suggestion wasn’t set in stone during Thursday’s meeting, but may be considered by the health department.

“Every business knows exactly what the rules are,” Johnson said. “They’re defying the rules, and what we’re doing is punishing the people who are following the rules.... It’s just somebody’s refusal to move chairs, put a mask on and social distance.”

Johnson emphasized his concern that businesses operating illegally could put the community – and the fate of other businesses who are complying – at risk.

“During normal times, restaurants have to follow health standards and rules and regulations set forth by the liquor board and other authorities,” he said. “While I understand that some of these regulations during COVID-19 are putting a strain on businesses, they were put in place to protect the health of Arizona residents. We all saw what happened with our numbers when bars, restaurants and others were allowed to reopen at the end of May and no regulations or real rules were placed on them…. It is in everyone’s best interest to follow the rules so we don’t see a spike.”

Supervisor Ron Gould voted against the motion, and expressed his disapproval of how the pandemic is being handled.

Burley explained the steps her department takes to address business non-compliance. The first step is an inspection, followed by education and technical assistance, which includes informing the owner of the rules outlined by Ducey’s executive orders. A second inspection would be done within 72 hours, at which point a verbal warning would be issued to the owner if compliance is still not met. If compliance is still not evident after a third inspection within the following 72 hours, a written warning will be issued. After that, penalties can come into play.

County Attorney Lenore Knudtson says the health department has the authority to impose a civil penalty after an order to comply has been ignored.”

“If the business fails to comply with that order to comply, then it is possible for the health department to impose $1,000 a day, up to $10,000, as a civil penalty,” she said.

If compliance is still not followed, even after penalties are issued, further action is initiated.

While Sheriff Doug Schuster has stated he will not enforce the governor’s shutdown orders, his chief deputy, Ralph McKie, said the department would be receptive to court orders. “If we received a court order from a superior court judge, we would most definitely entertain that,” McKie said.

The Arizona Department of Health Services recently released a “COVID-19 Compliance Hotline” and citizen reporting form that allows members of the public to alert the state health department if a business is not complying with regulations. The hotline number is 844-410-2157, and the form can be located at azhealth.gov/compliancecovid-19.

They were issued letters Thursday from the health department warning that “all available means approved by the Mohave County Board of Supervisors will be utilized to ensure compliance, including referral to law enforcement.”

Knudtson said “all available means” includes notifying the state liquor licensing board, which could then decide to revoke or fail to issue a liquor license for a non-compliant business.

According to the letter, Blondies was initially visited by a health inspector on Aug. 25 in response to a complaint from a member of the public. The letter states the owner said “they did not have to comply because they were in the county, not the city limits.”

A second inspection was conducted Aug. 28 due to a second complaint, and the establishment was urged to immediately comply with the orders in place for restaurants. The inspector noted employees were not wearing face coverings, tables were not properly spaced, patrons weren’t instructed to wear masks, 50 percent capacity was not followed and patrons were not prevented from standing in close proximity, according to the letter.

“That hurts other businesses because the playing field is no longer level,” Knudtson said. “Some businesses are operating in compliance, making little to no money. Other businesses are essentially refusing to comply with the law, and they’ve garnered all the business. That’s unfair. So the best thing that we can do is to uniformly apply the executive orders and the statutes to ensure the citizens of Mohave County are safe and that businesses are on a level playing field.”