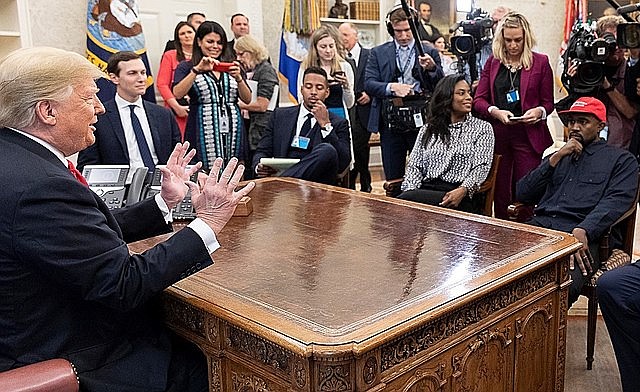 Kanye West, right, shown meeting with U.S. President Donald Trump, will not appear on the Arizona presidential ballot on Nov. 3 after the Arizona Supreme Court upheld a ruling by a lower court striking West from the ballot. (Official White House photo/Public domain)

PHOENIX (AP) — The Arizona Supreme Court on Tuesday rejected Kanye West’s bid to appear on the state’s Nov. 3 ballot as an independent presidential candidate, just hours before eight of the state’s 15 counties faced a deadline for printing ballots.

The decision marked the end of the rapper’s attempt to run in Arizona. He had appealed a lower-court decision last week that barred him from the ballot.

The Supreme Court concluded West’s electors — who would have cast Electoral College votes if he had won the most votes of any candidate in Arizona— failed to file an election document stated their names and political parties. The justices said any nominating signatures collected before presidential electors filed their “statements of interest” are invalid.

West has qualified to appear on the ballot in several states, including Arkansas, Idaho, Iowa, Tennessee, Utah and Mississippi. He didn’t qualify in Ohio, Montana, West Virginia, Virginia, Wisconsin and other states.

A message left Tuesday for Tim LaSota, an attorney representing West, wasn't immediately returned. The attorneys who challenged West's candidacy said in a statement that they were pleased that the court prevented "a candidate who didn’t follow Arizona’s election laws from getting on the ballot at the last minute.”

Last week, West’s campaign turned in nearly 58,000 nominating signatures, well over the 39,000 needed to appear on the Arizona ballot.

Over the last two weeks, more than 140 people living in other states have registered in Arizona as paid signature gatherers for West, who announced his presidential campaign on July 4. His campaign has spent more than $1 million in Arizona.

State resident Rasean Clayton filed a lawsuit seeking to bar from appearing on the ballot, accusing the rapper of serving as an election spoiler and argued that state law barred him from running as an independent candidate because West is a registered Republican.

West’s lawyers said their client’s status as a registered Republican in Wyoming was irrelevant to getting on the Arizona ballot. They said when West filed federal election paperwork, he listed his political party as “BDY,” an abbreviation for Birthday Party.

Despite those claims, Clayton’s attorneys said West remains a registered Republican. They also said nearly all of West’s electors were Republicans until they changed registrations to independent last week.

It’s unclear whether Clayton has any connections to the Democratic Party. He said in a statement that he filed the legal challenge to West’s campaign because he didn’t want voters to be confused by seeing unqualified candidates on the ballot.

Attorneys for West brushed aside criticism that West was trying to be a spoiler aimed at hurting Democratic nominee Joe Biden’s chances in Arizona. They said Clayton’s lawsuit was aimed at denying voters a choice.