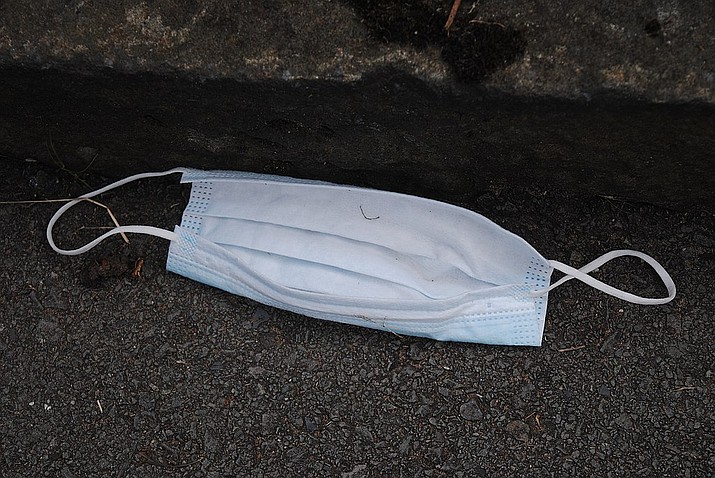 Scottie McClure from Bullhead City came in person to tell the supervisors they are doing “a really crappy job” informing residents about their meetings. (Photo by Andy Mabbett, cc-by-sa-4.0, https://bit.ly/3m5X2ZU)

KINGMAN – During the public comment portion of the Tuesday, Sept. 8 Mohave County Board of Supervisors meeting the supervisors came under fire from some residents who are upset over how they are handling the COVID-19 pandemic.

“I find it funny that the board mandates masks and social distancing,” read Clerk of the Board Ginny Anderson on behalf of Don Taylor from Bullhead City, who submitted his criticism in a written form, "but the supervisors who sit up there and make these decisions are not following their own guidelines. There have been several board meetings that I’ve watched where the board members were not socially distant from one another and hardly any of you keep your mask on the entire meeting. Maybe this board needs to set an example if it wants (the public) to follow it.”

“I want to know how it is fair,” asked Jennifer Taylor from Bullhead City, “that I was not able to attend my gym for months, but county employees were still enjoying them in a taxpayer-funded building. Some of the decisions being made by this board during this pandemic are hypocritical and insulting to us, taxpayers. I didn’t even know the county had their own gyms, let alone three of them. Since I partially paid for these gyms with taxpayer money, how do I get the pass to exercise in them.”

Scottie McClure from Bullhead City came in person to tell the supervisors they are doing “a really crappy job” informing residents about their meetings.

“Start posting the agenda,” he said, adding he found out about this meeting by accident. “I’m tired of not being able to know when you are going to do something here.”

He complained about disabled people not being able to go to stores anymore, saying the doors at Safeway and Walmart in Bullhead City are “chained,” as he said.

McClure also said he hopes he will be first in line to get a COVID-19 vaccination, since he has Cryptogenic organizing pneumonia, he said, and needs help. He observed though that the county will probably not get vaccines at all since it doesn’t have a place to store them.

Supervisor Hildy Angius of District 2 said she posts all the agendas on the front door of her office, per McClure’s previous request. She also assured the board and the audience that all doors in all Bullhead City grocery stores are open.

Supervisor Ron Gould of District 5 said he posts agenda on the door of his offices, too – in Mohave Valley and in Lake Havasu City. If one manages to find his “secret office” in Lake Havasu City, “we will give you a cookie,” he promised.