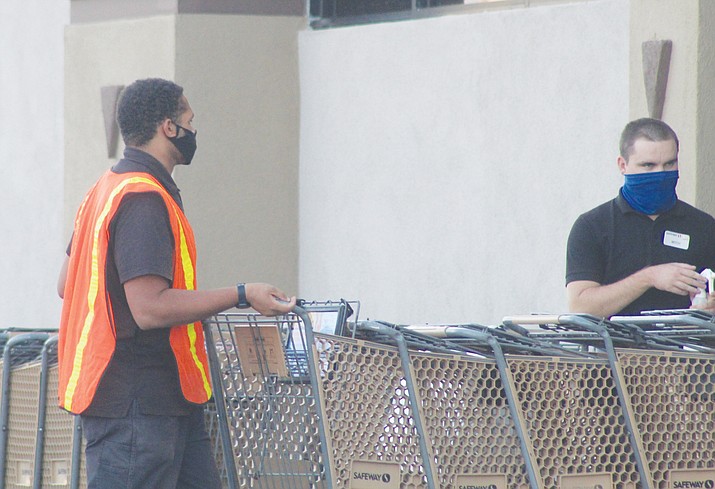 Face coverings will remain mandatory for entering businesses in Kingman for those age 6 and older through at least Oct. 20. (Photo by Casey Jones/Kingman Miner)

KINGMAN – Mayor Jen Miles’ face covering proclamation survived a lengthy discussion and a 5-2 vote at Kingman City Council’s Tuesday, Sept. 15 meeting, however, the matter of masks will be reevaluated by the city’s elected officials on Oct. 20.

The original proclamation requiring that persons over the age of 6 wear face coverings when entering places of businesses in Kingman went into effect Wednesday, July 1, and was extended through the month of August. Then late last month, the mayor extended the proclamation through 2020.

That decision was met with applause from some and ire from others, with subsequent discussions and opinions resulting in the matter being taken to council for ratification. Ratification played a crucial role in the discussion, as it has been the opinion of some within the community that the mayor’s initial proclamation expired after 72 hours as it was not ratified by the full council.

In making her introductory remarks, the mayor noted opposition received regarding the mask proclamation, but said she would continue to “stand with the mayors of 90% of Arizona cities and the governors of most states in our nation who believe that requiring protective measures, including mask covering mandates, help ensure citizen health and safety during the public health crisis …”

The mayor continued, saying she’s glad to have kept the proclamation in place for more than two months with administrative and legal support of the city.

She said it was a “critical time” during which the spread of the virus was slowed.

“But this evening it will be up to this council to determine whether the face covering requirements continue to the end of the year,” Miles said. “I believe it is wise to do so in order to build on the successful reduction of our COVID numbers in Kingman. Let us acknowledge that we have come a long way in slowing the spread; we are being successful in our efforts to contain the virus, but it is premature to test that success.”

Councilman David Wayt delivered an analysis of good, and less than compelling, arguments council has received from community members. He said he appreciates how that on both sides of the mask argument, there exists concern for the small business community. He said over-exaggerated or emotionally charged language does not make for compelling arguments, nor does threatening councilmembers with recall should they not vote a certain way.

“Our decisions should be made based off of a fair balance between what is best for our constituents based off of all the available data we have, coupled with the will of the people, not out of fear of keeping our position,” he said. “That would be a bad policy for a councilmember to have.”

Wayt also said he didn’t think it’s outside of the government’s authority to impose regulations to keep people safe, saying “it might not be a bad idea to err on the side of caution.” However, he said he’d like to see objective criteria within the proclamation to use as a benchmark to trigger the end of the proclamation, and a more frequent review of the proclamation by council.

However, her statement’s focus was on the manner in which people are treating one another regarding masks. She asked why those who choose not to wear masks pick on those who do, and vice versa.

Nelson is curious as to “what happened to kindness?”

Vice Mayor Travis Lingenfelter, in referencing data from the Mohave County Department of Public Health, said approximately 1.6% of Kingman’s population has tested positive for COVID-19. He said extremely vulnerable or at-risk populations should remain locked down taking the most stringent precautions.

“For the majority of Kingman’s population, it’s my own view that if a public agency is going to establish a mandate that affects everyone’s life, then as it’s been stated before, it must be well-defined, it has to be as narrowly tailored as possible and as temporary as possible, and also tied to clearly stated and logical criteria,” he said.

Council decided to continue the mask requirement, though with a twist. The vote came to 5-2, with Lingenfelter and Nelson casting the dissenting votes.

A motion was made to reevaluate the face covering proclamation in November, which ended up being too great a span of time for some councilmembers. Therefore, the motion was ratified so that the reevaluation of the proclamation will occur at the Oct. 20 council meeting.