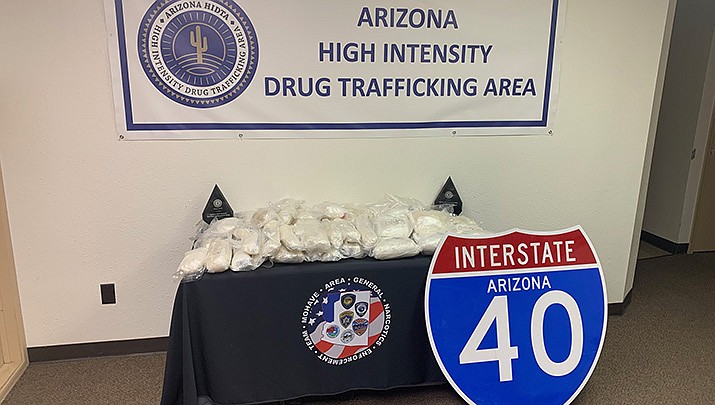 Methamphetamine with a weight of 89 pounds and an estimated street value of $3.9 million was confiscated by law enforcement officers after a traffic stop on Interstate 40 on Thursday, Sept. 17. The four occupants of the vehicle were arrested on drug charges.

KINGMAN – Nearly 90 pounds of methamphetamine with an approximate street value of $3.9 million was confiscated by detectives with the Mohave Area General Narcotics Enforcement Team following a traffic stop on Thursday, Sept. 17.

The Mohave County Sheriff’s Office wrote in a news release that at about 5:30 p.m., detectives conducted a traffic stop at milepost 57 on Interstate 40. During the stop, an Arizona Department of Public Safety K-9 responded and assisted.

Following a positive K-9 alert, the vehicle was searched and numerous bundles of methamphetamine totaling 89 pounds were reportedly located hidden inside the vehicle.