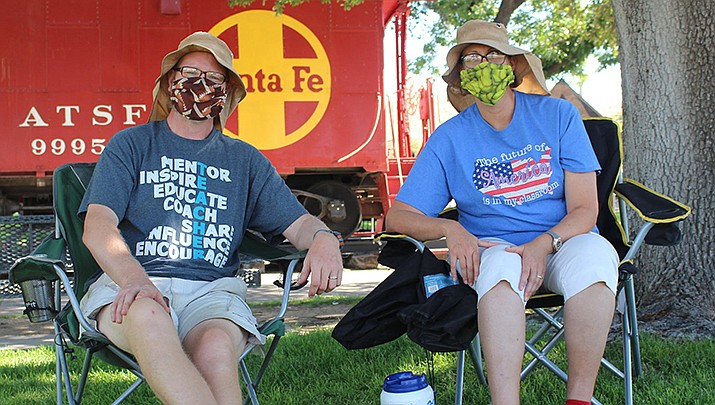 The mask mandate in Kingman has been copasetic with some residents, but has now resulted in a recall effort aimed at Kingman Mayor Jen Miles and city councilmembers who supported the mayor’s face covering proclamation. (Miner file photo)

KINGMAN – A recall effort is underway for Kingman Mayor Jen Miles and those Kingman City Councilmembers who voted to continue the mayor’s face covering proclamation until Oct. 20 at council’s Tuesday, Sept. 15 meeting.

Vice Mayor Travis Lingenfelter and Councilmember Deana Nelson were the only two members of council who voted against continuing the mask requirement, and as such are not named in the recall effort.

Coffman said the mask requirement is the main reason he pulled paperwork, however, he added his actions are due to more than one consideration. He said individual choice is being taken away from those within the City of Kingman.

“I know the virus is causing a lot of mixed emotions and everybody has their own concerns, but to not have a choice in so many things in our daily lives anymore, it’s becoming overwhelming for a lot of people and a lot of people are losing jobs and it’s just a lot to put onto everybody,” Coffman said. “I think we need to get back to making our own choices and being free.”

Kingman City Clerk Annie Meredith explained that for the recall of councilmembers, 1,438 valid signatures are required for each. For the recall of the mayor, that figure is 1,384.

Signatures are valid if they come from registered voters residing within city limits. The deadline to file paperwork for the recall of the mayor is Jan. 12, while the deadline for councilmembers is Jan. 19.

As far as when that election would be held, Meredith said May or August 2021 could be a possibility.

Coffman said recall petitions will be made available for signatures at 6 p.m. Thursdays and 4 p.m. Sundays across from the library at Centennial Park, 3333 Harrison St.

“I just hope people start standing up and letting their voices be heard,” Coffman said.

“Either way, we all have a right to our opinions. I’m not for saying no one should wear a mask. I just want individual choices to be made without having them made for us,” he said.