Eric Trump urges evangelicals to back father in Arizona 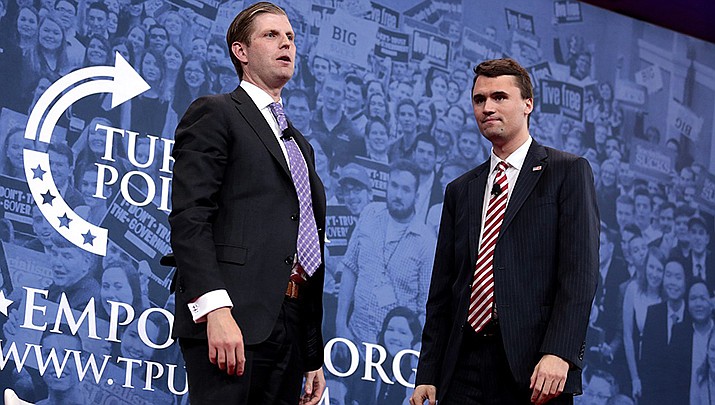 Eric Trump, left, the son of U.S. President Donald Trump, campaigned for the president in Glendale on Wednesday, Sept. 23. Trump is shown with Charlie Kirk before speaking at the 2018 Conservative Political Action Conference in National Harbor, Maryland. (Photo by Gage Skidmore, cc-by-sa-2.0, https://bit.ly/32YnvBj)

GLENDALE - President Donald Trump's son Eric Trump urged evangelicals during a visit to Arizona Wednesday to back his father because he supports religious freedom, is opposed to abortion and will back Christians' ability to speak freely.

He addressed a crowd at Dream City Church in Glendale, an Assemblies of God congregation with several large facilities in metro Phoenix. The president held a rally at the church's Phoenix location in June.

Eric Trump's visit was the latest in a series of recent Trump campaign events that began June 14 with a Phoenix rally by the president. That was followed by visits by Ivanka Trump and Vice President Mike Pence.

The campaign is trying to shore up support among Latinos, veterans and the religous right as polls show him in a close race with Democrat Joe Biden in Arizona.

Eric Trump told those in attendance the Democratic Party is behind attacks on the 1st Amendment and freedom of speech. He said God has helped the president fend off attacks.