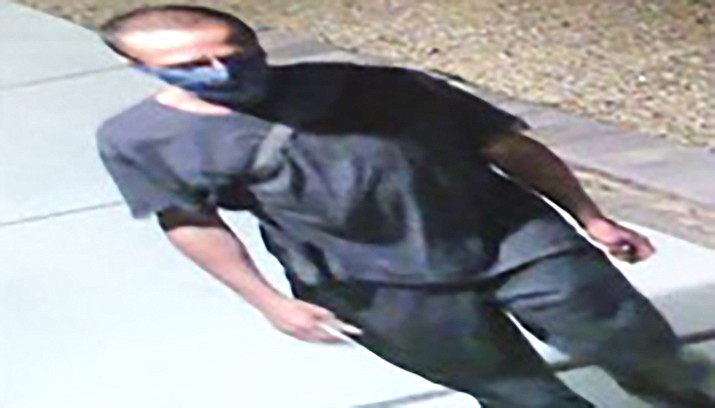 Kingman police are looking for this man in connection with a robbery at the Walgreens store at 1925 E. Andy Devine Ave. (Courtesy photo)

KINGMAN – The Kingman Police Department is seeking the public’s assistance in identifying a male armed robbery suspect from an incident at about 8:15 p.m. Sunday, Sept. 27.

Police wrote in a news release that a male subject entered Walgreens at 1925 E. Andy Devine Ave. and selected a couple of drink items before proceeding to the clerk.

The suspect demanded money from a clerk, indicating that he had a gun. The clerk did not see a gun and gave the suspect the money in the register. The suspect left the store and area on foot and in an unknown direction with an undisclosed amount of cash and drinks.

The suspect is described as a white male in his 20s or 30s of medium height and build with brown hair in a buzz cut and unknown eye color. He was last seen wearing a dark colored T-shirt, pants and shoes. The suspect entered the store wearing a light-colored ball cap, face mask and a gray sling-style backpack.

Anyone who sees the subject should call 911 and should not approach as he is considered armed and dangerous, police advised.

Anyone with information is urged to contact the Kingman Police Department at 928-753-2191; report tips online at www.kingmanpolice.com; or report anonymously by calling Mohave Silent Witness at 928-753-1234.