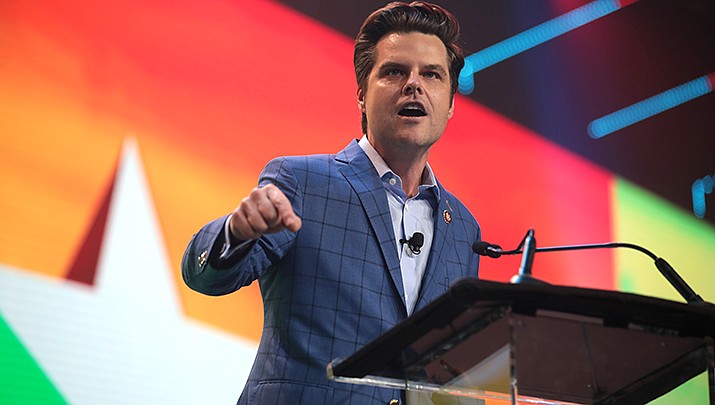 WASHINGTON – Republican Rep. Matt Gaetz, a prominent, outspoken conservative and a close ally of former President Donald Trump who has been under federal investigation for a former relationship, would lose his House seat if convicted of a felony. But there are no rules addressing lawmakers under investigation.

House Minority Leader Kevin McCarthy said Wednesday that Gaetz would be removed from his committees if the charges were proven, but sidestepped the issue of what to do while the case is ongoing. Democrats called for him to step aside from the House Judiciary Committee, which oversees the Justice Department.

“Those are serious implications,” McCarthy, R-Calif., said on Fox News. “If it comes out to be true, yes, we would remove him if that was the case. But right now Matt Gaetz says it is not true, and we don’t have any information. So let’s get all the information.”

Gaetz, who represents parts of western Florida, has known for months that he was under federal investigation over accusations that he had a sexual relationship with a 17-year-old girl and paid her to travel with him, two people familiar with the matter told The Associated Press.

During that time, he has remained on both the House Armed Services Committee and on the Judiciary Committee, which has congressional oversight of the Justice Department. He has been one of Trump’s most vocal defenders on the Judiciary panel, fiercely defending the former president through two impeachments and other investigations.

Gaetz is under investigation to determine if he violated federal sex trafficking laws, said the people who were not authorized to speak publicly and spoke to The AP on condition of anonymity.

The Justice Department has also been looking into whether Gaetz, 38, may have also been involved in relationships with other underage girls, the people said.

The case, which reached the highest levels of the Justice Department, has been going on for nearly a year and former Attorney General William Barr was briefed on the matter several times, the people said. Investigators have also interviewed several witnesses in the case and have been scrutinizing documents, including travel and financial records, the people said.

In at least one instance, a high-profile Washington defense attorney and his law firm declined the opportunity to represent Gaetz after the congressman reached out, seeking to hire him for his case.

Some Democrats have called for his committee positions to be revoked.

Rep. Ted Lieu, D-Calif., tweeted that Gaetz should “resign and be prosecuted” if sex trafficking allegations prove true. Lieu wrote that until then, “You can’t have Gaetz sitting on the Congressional Committee that has oversight over the Department that is investigating him.”

Gaetz did get backing from Rep. Marjorie Taylor Greene, R-Ga., the hard-right freshman who’s had her share of run-ins since arriving in Congress this year.

“Remember all the conspiracy theories and lies like Trump/Russia collusion and propaganda that the media has spread around. Take it from me rumors and headlines don’t equal truth. I stand with @mattgaetz,” she tweeted.

Gaetz told Axios that his lawyers were informed that he was the subject of an investigation “regarding sexual conduct with women” but that he was not a target of the probe. He denied that he ever had a relationship with any underage girls and said the allegations against him were “as searing as they are false.”

A subject is conventionally thought of as someone whose actions fall within the scope of a criminal investigation, whereas a target is someone whom prosecutors have gathered evidence linking to a crime. But during the course of an investigation, a subject can become a target.

It is a federal crime to transport a minor over state lines for sex.

Gaetz said the allegations were part of an extortion plot by a former Justice Department official, whom he identified as David McGee. The lawyer has been in private practice for more than two decades.

“Over the past several weeks my family and I have been victims of an organized criminal extortion involving a former DOJ official seeking $25 million while threatening to smear my name,” Gaetz said in a statement.

In response, McGee's Florida-based law firm released a statement saying the allegation that Gaetz made about the supposed extortion attempt was “both false and defamatory." The firm said McGee had served in top positions at the U.S. attorney's office in Florida about 25 years ago and his “reputation for integrity and ethical conduct was impeccable.”

Gaetz said his family has been cooperating with the FBI and said his father was wearing a recording device, at the FBI’s direction, “to catch these criminals.” He demanded the Justice Department release the recordings.

“No part of the allegations against me are true, and the people pushing these lies are targets of the ongoing extortion investigation,” he said.

The scrutiny of Gaetz stemmed from a separate Justice Department probe into one of his political allies and fellow Florida politician, Joel Greenberg, who was indicted last summer on sex trafficking and other charges that he stalked a political opponent, the person familiar with the matter said. A judge ordered the former tax collector back to jail earlier this month for violating the conditions of his release and federal prosecutors issued a superseding indictment in his case on Tuesday, though there is no mention of Gaetz in the court documents.

“I believe that there are people at the Department of Justice who are trying to criminalize my sexual conduct, you know, when I was a single guy,” Gaetz told Axios.

“I have definitely, in my single days, provided for women I’ve dated,” Gaetz said. “You know, I’ve paid for flights, for hotel rooms. I’ve been, you know, generous as a partner. I think someone is trying to make that look criminal when it is not.”

Gaetz has not been charged with a crime. The Justice Department did not comment.