Fairy Tales on Tour: With large indoor productions on a COVID hiatus, a local theater is taking fairy tales on tour outdoors 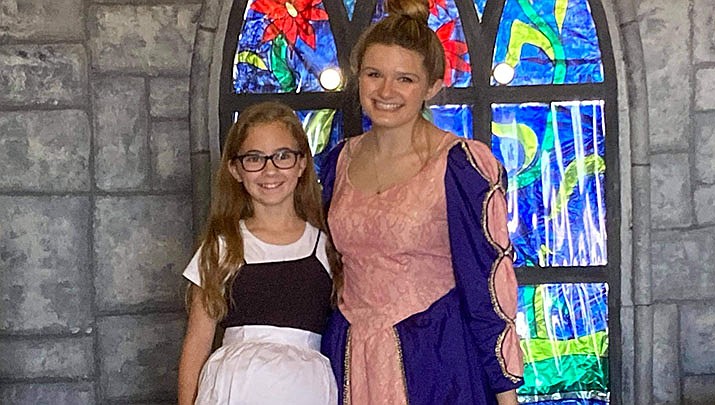 Mollie Taylor, left, and Amber Wisely, a senior at Lee Williams High School, pose for a photo. Taylor will play Rapunzel, and Wisely, who is directing the play, will make a cameo as Rapunzel’s mother. (Photo by Agata Popeda/Kingman Miner)

There is a magical forest on Beale Street where Robin Hood and his crew supposedly hide. And a rumor has it that Captain Hook is prowling around Locomotive Park, making the corner of West Beale Street and 1st Street a scary place. Fairytale creatures left the world of indoor theater and – for a string of Saturday afternoons: April 10, 17 and 24 – they will hang out downtown.

“I was approached by several Kingman families to do something magical but COVID-safe for our kids,” said Sidney Valdez of Beale Street Theater and Kingman Center for The Arts, the artistic director for the upcoming production called “Stroll Down StoryBook Lane.”

“We really needed to adapt from large productions indoors. So we created walking tours to keep the theater alive,” Valdez said.

But walking theater is not the only innovation proposed by Beale Street Theater, 304 Beale St., this spring. This time, the directors of the plays – yes, five of them! – will be local teens.

“They are absolutely ecstatic to have the opportunity to get a feel of how directing feels,” Valdez said. “I told them that we could have one huge fairytale or five different stories. They picked the second option.”

The result is a 45-60 minute walk that starts at the theater with a five-minute “Rapunzel” directed by Amber Wisely, followed by “Princess Pen Palls” – an original story written and directed by Havana Cantu and George Valdez. Then the tour will move to a magic forest on Beale Street for “Robin Hood” directed by Nick Hunt and in front of West of Third to see “Shipwrecked” directed by Terrence Banks. After a little pick-me-up consisting of cookies and lemonade, the audience will witness a final face off with dangerous Captain Hook (played by one of the theater board members, Valdez said). The adventure will end at Locomotive Park with “Peter Pan” directed by Drew Stevenson. A dance number from Peter Pan has been choreographed by Rylie Taylor.

Amber Wisely and Terrence Banks, both 17 and seniors at Lee Williams High School, have been involved with the theater before.

“Sidney texted me one day and I said, ‘Yes, of course,” Banks recalled. “It’s a huge opportunity.”

Banks said walking theater is nothing new to Kingman. They did ghost walks last Halloween, which was “similar, but scarier.”

He picked “Shipwrecked” because the story is practical and funny, he said.

“The crew is wonderful,” Banks said about his group.

Like Banks, Wisely is interested in pursuing acting and directing in college – musicals specifically, she told the Miner. She wrote her script based on “Rapunzel,” which is an old story, and “Tangled” by Disney – the modern twist on the tale. She is in charge of a crew of five and will make a cameo as Rapunzel’s mother.

“Directing is not that hard or at least it doesn’t seem that difficult,” Wisely said. “We are having a lot of fun. Our cast is amazing.”

Tickets are on sale at www.bealestreettheater.com. They cost $15 for adults, $10 for children ages 10-17, and $5 for children ages 4-9. Performance dates are Saturday April 10, 17 and 24. Adventure tours start at the Beale Street Theater, 304 E. Beale Street, with the first tour departing at 3:30 p.m. and then every half hour with the last one leaving at 6 p.m.