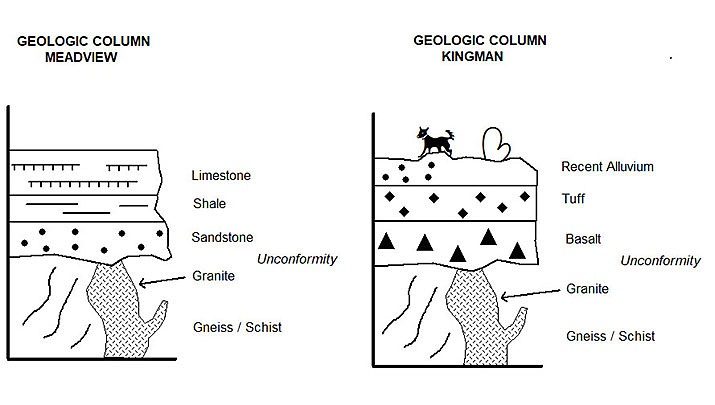 Limestone, shale and sandstone eroded from Kingman Column before tuff and basalt were deposited. (Illustration courtesy of Luis Vega)

In geology, as in life, it’s useful to know the sequence of events to keep things in order; what happened first, is this older than that, was I watching episode 5 or 8 of Longmire? Because the earth is always restless, moving up, down and sideways, it’s difficult to keep geologic events in order.

Without a full timeline of events in one outcrop, we must use relative ages; is one rock older than another, the same age, or is it younger? We can then take the age relationship from one outcrop and apply it to another and see if there’s evidence to support our conclusions.

The Cerbats and Hualapai Mountains consist primarily of schist, gneiss /nice/, and granite. The schist and gneiss are metamorphosed and the granite isn’t, so the granite is younger. If we look at outcrops where the two rocks are in contact with each other, the granite intrudes the schist. There are even chunks of the schist in the granite, called clots. Because there isn’t a formation below the metamorphic rocks, they must be the oldest around Kingman.

The sequence we have thus far developed gives us the following relative ages; the oldest rocks are the metamorphic ones, then the granite and the young ones are the sedimentary rocks. The sequence of sedimentary rocks indicates an ocean was encroaching onto this part of Arizona at the time the sedimentary rocks were formed because it starts with sandstone - rivers furnishing sediments from mountains, followed by shale, like in a river delta, then limestone formed in a shallow ocean. This is happening right now at the Mississippi and the Amazon River deltas.

But there are no sedimentary rocks in the Kingman area. What happened? Kingman has the old metamorphic rocks that were intruded by the granite then the next rocks are volcanic rocks that appear to be very young. So, were the sedimentary rocks not deposited here at all? Not likely. They must’ve been deposited and then eroded because of all the faulting and mountain building activity going on in this part of Arizona. The gap in the geologic sequence is called an unconformity. In the Kingman area there are very old rocks- metamorphic and granite, then relatively young volcanic rocks and recent alluvium.

The volcanic units can be seen on the volcano called Three Sisters Mountain, the lone peak to the west of the Hualapai Mountains. Those same units can also be seen on the west flank of Coyote Pass. The basalts are a darker color compared to the tan-colored Peach Spring Tuff. There are also basalt outcrops in Golden Valley that align in a north-south direction. These basalt outcrops lie along the range-front fault on the east side of the valley. Several have gravel pits like the one east of Aztec Road, north of W. Newgard Drive. The volcanic rocks at that site are more like andesite- very similar to basalt but being a geologist, I have to call ‘em as I see ‘em.

With our detective hats on, we can construct a geologic column based on the relative ages of the rocks and a sequence of events. From oldest to youngest; there were rocks that were involved in a collision between continents. This collision formed the metamorphic rocks schist and gneiss, the green-gray rocks that look stretched out. These early rocks were then intruded by granite. On top of the granite and metamorphic rocks, a sequence of sedimentary rocks was deposited in an ocean environment. Because of the faulting and movement, these sediments were eroded away in the Kingman area. Volcanic formations emanating from volcanoes and faults were deposited, beginning with basalt and then tuff. As the mountains were being pushed up, they were eroded, depositing recent sediments in the valley basins. Some of the basins were breached and are now being eroded.

As is evident, the sequence of geologic events gets very complicated and is still being worked out. I can work with relative rock ages but I give up on which Longmire episode I was watching so I’ll just start the series over.