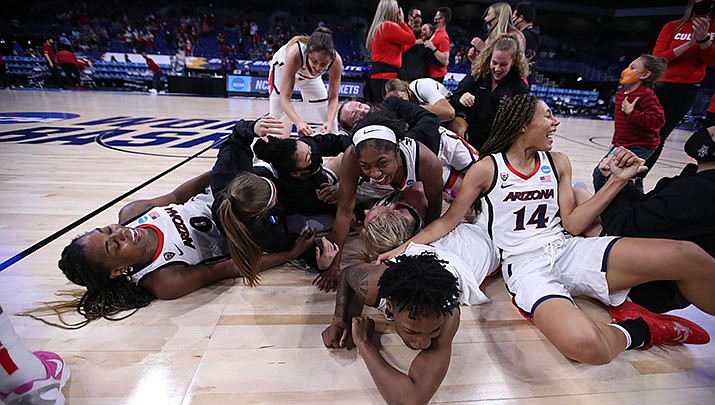 She'll have a chance to win her third title Sunday night when the Cardinal face Pac-12 rival Arizona. The Wildcats are playing in their first championship game ever after knocking off top-ranked Connecticut in the Final Four.

“It’s just I think a credit to how competitive the Pac-12 is,” Stanford coach Tara VanDerveer said.

It's the first meeting of conference rivals in the championship game since South Carolina beat Mississippi State in 2017.

Now the Pac-12, which has had six different teams reach the Final Four since 2013 will be guaranteed its first champion since Stanford won in 1992.

“I’ve been saying all along, the Pac-12 is the best conference in the country," Arizona coach Adia Barnes said. "Hands down.”

To get to Sunday night’s game the Cardinal got a little bit of luck edging South Carolina 66-65 on a basket by Haley Jones with 32 seconds left Friday night. The Cardinal survived two last-second misses by the Gamecocks.

Arizona didn't need any last-second karma to beat the Huskies. Wildcats Aari McDonald scored 26 points and the team played stifling defense on UConn, holding them to 22 points in the first half and leading by 10. UConn got within five with a minute left, but could get no closer.

The win made Barnes the third coach to lead her alma mater to the championship game, joining Sonja Hogg who guided Louisiana Tech to the first NCAA title in 1982 and was the runner up in 1983 as well as Wendy Larry at Old Dominion.

Meanwhile, Arizona saved its best basketball for the NCAA Tournament.

“I’m just happy we got hot at the right time during the tournament and if you look back at two or three weeks ago we weren’t playing our best basketball,” Barnes said. “So we started to change some things and got better. we just became more united right before the tournament and just found ways.”