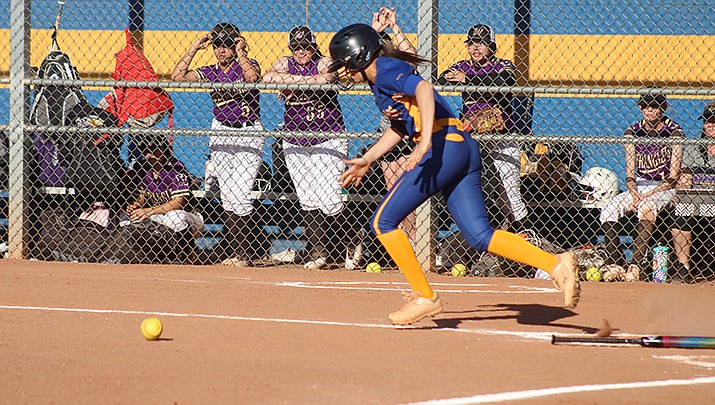 Amber Lopez of Kingman High School lays down a bunt single during the Lady Bulldogs 5-2 win over visiting Wickenburg on Tuesday, April 6. Kingman improved to 7-0 on the season with the win. (Photo by Casey Jones/Kingman Miner)

KINGMAN - Senior pitcher Lilianna Valdivia threw a three-hitter and struck out 10 batters as the Kingman High School Lady Bulldogs softball squad stayed perfect at 7-0 with a 5-2 win over Wickenburg on Tuesday, April 6.

“She absolutely dominated that game,” Kingman head coach Craig Lee said of Valdivia. “Location, her drop ball was where it needed to be. She stays composed no matter the situation.”

Of the 11 batters Valdivia didn’t fan, six of the putouts were recorded by the pitcher herself, including a double play she engineered after snagging a line drive destined to be a base hit and catching the runner off first.

Sophomore leadoff hitter Amber Lopez led Kingman on offense with a triple down the left-field line and a bunt single. She scored twice.

KINGMAN - Connor Watson threw a four-hit shutout to lead visiting Bagdad to a 4-0 win over Kingman Academy in a high school baseball game on Tuesday, April 6.

Senior Isaac Bridges, juniors Kaden Hatchel and Alexander Blanton, and sophomore Gauge Short hit safely for the Tigers, who slipped to 3-4 on the season with the loss. Bagdad improved to 7-1.

KINGMAN – Senior Daniel Oliver hit a two-run homer and the Kingman High School baseball team battled back from an 8-3 deficit only to fall 9-7 to visiting Wickenburg on Tuesday, April 6.

Kingman, which fell to 2-6 for the season with a third consecutive loss, had eight hits in all, including three for extra bases.

Kingman Academy scored three runs in the bottom of the fifth inning to take a 9-7 lead, but Bagdad answered with two runs in the sixth and one in the seventh.

Kingman Academy, which slipped to 3-4 with the loss, hosts Arizona Lutheran at 3:45 p.m. Friday, April 9 at Southside Park in Kingman.

For Kingman, No. 1 doubles players senior Jason Marquez and freshman Zachary Haliburton came the closest to posting a win, falling 8-5.

Kingman plays next at Anthem Prep at 2 p.m. Thursday, April 8.