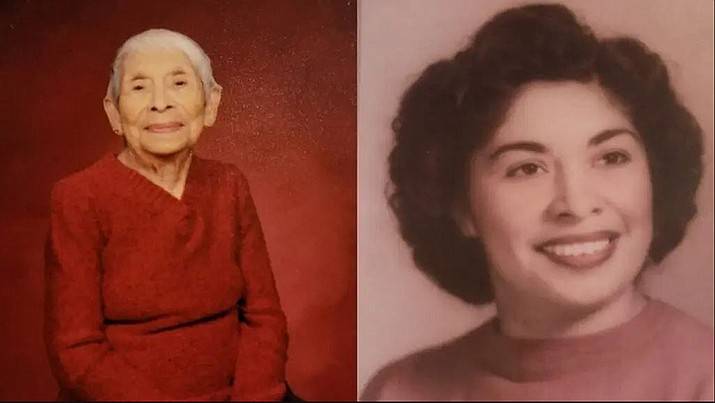 Angie Benavidez of Kingman passed away in Mesa, Arizona on March 22, 2021. She was born in what is now Sun City, Arizona on Sep. 26, 1933 to Aurora Ainza Moreno and Felix Moreno. She lived her life during a time of social change that meant she was forever evolving. Through it all, the power and strength of this woman was ever present.

Since Angie’s mom died when she was but 5 years old, she was raised by her dad, Nana, and Tia Lupita Hernandez. She attended schools and met her first husband while living in Cashion. She and Jerry Cisneros moved to Gunnison, Colorado where their two oldest were born. Although Jerry was born and raised in the San Luis Valley of Colorado, Angie was from the Valley of the Sun. The drastic change in temperature was as jarring as the change in her familial surroundings. While Frank and Jeff were still young the family moved back to Phoenix where Gary and Maria were born. The entire family then moved to Kingman and their youngest, Magi, was born. Kingman may have proved to be the tolerable medium of the two extreme climate variables.

After Angie and Jerry divorced, she began working at the Mohave General Hospital where she was the assistant to the housekeeping director for more than 10 years. Always proving to be extremely independent, she made her own way and provided a stable, welcoming and loving home for her family. Upon leaving, she became a well-known and sought-after housekeeper for many prominent families in the area.

She eventually met and married Tony Benavidez Sr. and had their own business, T & A Janitorial Services, while she continued cleaning homes during the day. Even upon selling the business to retire, Angie remained busy. She volunteered countless hours at the Kingman Area Food Bank and St. Vincent de Paul Thrift Store, and polling places during elections. She would house sit, dog sit, provide companionship, and continued to clean a few homes and businesses. She suffered quietly with crippling rheumatoid arthritis but encouraged us all to persevere despite our own sufferings. She taught us to be self-reliant and steadfast. She did this not with verbal lessons but with how she lived her life.

She enjoyed her family, traveling when younger, houseplants, gardening and good music. Her grandchildren and especially her great- grandchildren brought that beautiful smile to her eyes. Just hearing their voices would have her brimming from ear to ear. Conversely, one would know immediately if she was not pleased with your actions.

In July of 2020, Angie made the decision to live alone no longer. She moved in with and was cared for by her granddaughter Terra and family in Mesa. On Feb. 3, 2021 she had a minor stroke which she spent a month recuperating from and then returned to Terra’s home. She passed peacefully the morning of March 22, 2021.

Angie was cremated and a small family gathering will take place April 17, 2021 at Gary’s home in Mesa. The gathered will honor and celebrate our matriarch’s life and give thanks for the opportunity to have known and loved her.