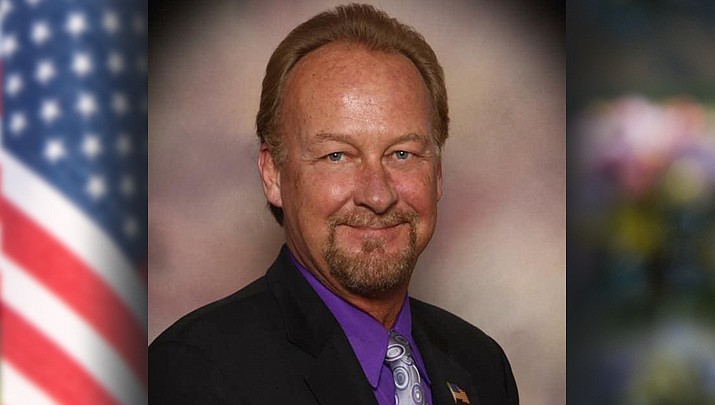 He was born in Missouri Valley, Iowa to Jerome and Rita Bekaert and was a proud resident of Kingman since 2009.

David joined the United States Marine Corps directly out of high school. He served proudly in the Corps for 12 years, earning the rank of staff sergeant and was a combat veteran of Operation Desert Storm. David was a true patriot with a great passion for the country he loved so much. This passion continued after his military career, where he supported veterans throughout this community, including raising the funds necessary to install the initial veteran banners we see flying today on Andy Devine and Beale Street.

Following his military career, David began a new career in the title industry as a sales representative for 20 years, receiving awards for Affiliate of the Year several times, Affiliate Ambassador and was nominated for an Andy Devine Award and 2018 Humanitarian of the Year. He later moved into the lending profession to assist first time homebuyers and veterans before retiring late last year.

At the young age of 10, David was watching a Jerry Lewis Telethon to raise money for the MDA, so he picked up a coffee can and hit the streets of Missouri Valley, Iowa asking for spare change for Jerry’s Kids and then brought the money to the police station after collecting over $100. He never put that coffee can down as he was always raising money for various events and causes throughout his life including having wheelchair accessible swings installed at La Senita Elementary School and installing veteran banners throughout the city. David emceed so many events that we joked that David never met a microphone he didn’t like. He was truly a giver at heart. At a fund raiser for Sarah's House he hosted an auction and he was so professional and when asked how many times he had conducted an auction like that, he answered that that was his first time.

David was larger than life and he will be greatly missed, but never forgotten. Some people go their entire lives wondering if they made a difference in the world…We will never wonder about that with David, as he made a difference for so many.

A Celebration of his Life will be held at noon on Saturday, April 17 at the New Life Church in Kingman located at 419 Harrison St. In lieu of flowers, the family requests a donation be made in his name to support local veterans.