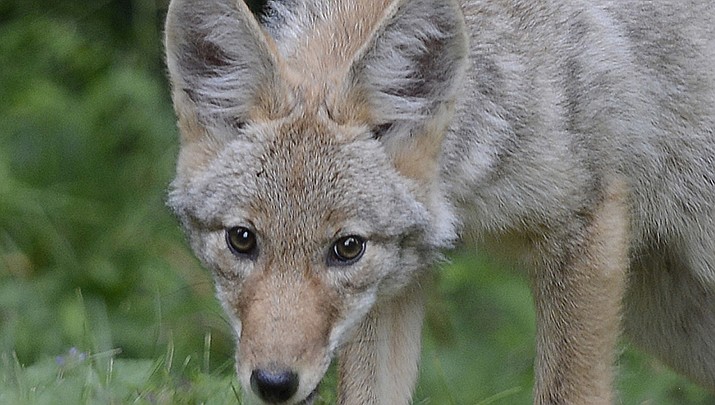 The Arizona Game and Fish Department is conducting aerial gunning of coyotes between Seligman and Kingman to help prevent predation of pronghorn antelope fawns. (Photo by VJAnderson, cc-by-sa-4.0, https://bit.ly/3sNSMRU)

The department will collaborate in an effort to lethally remove coyotes from April 12 through May 31 to improve low fawn survival documented in the pronghorn herds in game management units 10 and 18A, which are in the Kingman region.

Arizona’s pronghorn populations have been declining due to drought and other factors, such as encroachment of woody plants, habitat fragmentation due to road building and fences, and habitat loss due to development, AZGFD wrote in a news release. The department is trying to help pronghorn in specific areas where herd declines have been severe.

“Fawns are most susceptible to predation during the first few weeks of life,” said April Howard, the department’s predator, furbearer and large carnivore biologist. “Our intent is to reduce predation during the fawning season to provide newborn fawns a window of survivability. Reducing predation has proven to give newborn fawns a chance to survive long enough so they can escape predators.”

Aerial removal efforts will be conducted in targeted areas of Units 10 and 18A, located between Kingman and Seligman, where pronghorn fawn recruitment has been low due in large part to dry range conditions and predation by coyotes. The estimated pronghorn populations have declined in these units since 2015, AZGFD wrote. The fawn-to-doe ratios also have been lower than AZGFD guidelines for the past five years in both units, but recent surveys conducted in Unit 18A show those ratios are rebounding after one year of coyote removal efforts focused during the pronghorn fawning season.

Coyote removal is a short-term effort to assist pronghorn herds in trouble. These efforts are part of a much larger effort that addresses habitat quality by thinning encroaching juniper trees and installing water sources. AZGFD biologists are working with land management agencies, conservation groups, ranchers and the public to address long-term habitat concerns in these areas, the release noted.