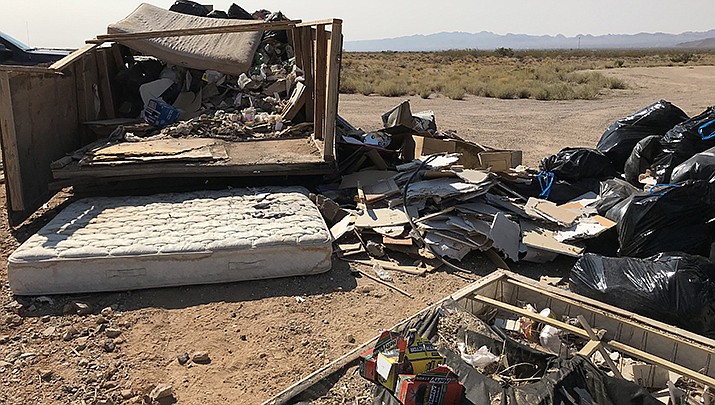 A Chloride man has been charged after allegedly dumping this pile of debris along Old Boulder Dam Highway near Chloride. (Mohave County courtesy photo)

CHLORIDE – A Chloride man has been charged with two felonies after allegedly dumping a large amount of trash along Old Boulder Dam Highway near Chloride, then allegedly threatening/initimidating a witness.

Jeffrey Marconi, 58, was charged with criminal littering exceeding 300 pounds and threatening/intimidating a witness, both class 6 felonies, according to a news release from Mohave County.

Detectives with E.R.A.C.E. were notified on Oct. 19, 2020 of an illegal dump site that included a broken home-made trailer containing miscellaneous trash, and a field of debris around it in the right-of-way of the road about a mile from Chloride.

An investigation linked the trailer to Marconi, who reportedly admitted to owning the trailer, but he failed to remove the trailer and debris after being issued a five-day notice for removal, the news release explained. After 10 days, the Golden Valley Cactus Cleaners volunteer group removed the trash, City Towing removed the trailer, and E.R.A.C.E. paid for the landfill dumping fee. Nearly 2 tons of items were removed.