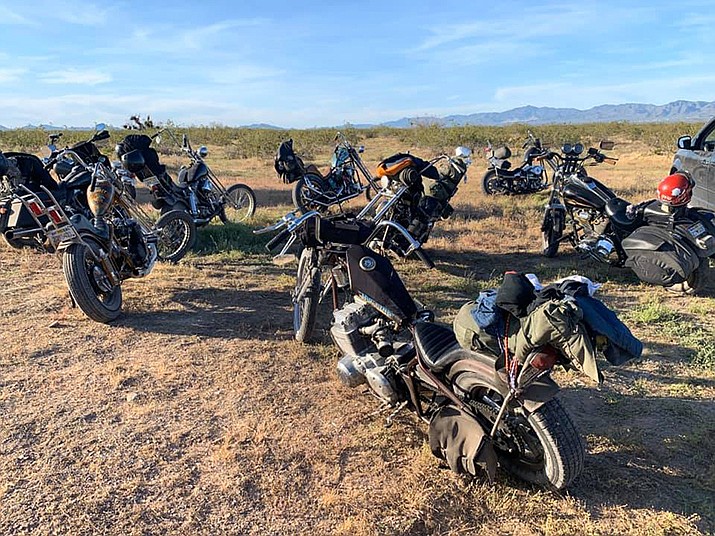 Route 66 Bike Week is expected to give businesses a boost from Needles, California to Seligman. (Courtesy photo)

Communities and businesses along and near the Mother Road wanted in on the action that is Route 66 Bike Week – five days of activities, games, discounts, scenic biking and more set for April 21-25 along the historic highway from Needles, California to Seligman.

Event organizer Rob Borden is no stranger to motorcycle rallies as the owner of Saddle Sore Ranch, located between mile markers 36 and 37 on Route 66, approximately 17 miles from Kingman.

But this is the first year for Route 66 Bike Week, which has seen the expansion of what has been dubbed the “Laughlin Loop.”

“It kind of started by accident,” Borden said, noting the loop includes Route 66, going through Oatman and down over highways 95 and 68. “It’s just a nice, scenic ride for motorcycle enthusiasts. With the Laughlin River Run not happening, at least not in the past two years, I got a call from Needles, California from their tourism center asking if they could be included in this Laughlin Loop and I said ‘absolutely.’”

Borden then received a call from the chamber of commerce in Oatman seeking to be included in the event. Then the City of Kingman and its visitor’s center wanted on board, followed by Seligman.

“So then I’m looking at it and I’m like ‘wow, Needles to Seligman,’” Borden said. “I said ‘why don’t I just do a Route 66 Bike Week,’ and that’s how it happened. That way we can promote all these small businesses down Route 66 that even in normal times they struggle. Now with COVID, of course, they’ve been struggling even more.”

So Borden began reaching out to businesses along Route 66 to see if they would be interested in participating by way of deals and discounts for event participants.

“They loved the idea and wanted to be a part of it,” he said. “Basically, the idea is rather than just have a stationary event that’s confined to some big parking lot, let’s kind of highlight these businesses up and down Route 66 and get them involved. They’ve put together special offers and discounts, maybe extra effort for bands for bars. Those are different stops on the rally.”

Registration for bike week can be completed by going to http://route66bikeweek.com/, with prices ranging from $45 to $48 depending on the package chosen. Borden said there is associated costs for the event that include T-shirts, bike week wristbands and dissemination of the Route 66 Passport, the latter two providing participants with access to discounts from businesses and drawings for prizes, respectively.

“So when you show up with your bike week wristband, you’ll get freebies and discounts,” Borden explained. “We’ve got about 20 free drawing stops.”

A scavenger hunt is planned as well utilizing the Route 66 Passport. Borden said there will be five different stops along Route 66 at which participants can have their passports stamped. Upon getting all the stamps and presenting them at Rally Central, which is Saddle Sore Ranch, they will receive a free ticket for yet another drawing.

Borden also said those wishing to cruise Route 66 during bike week don’t have to register, but that they will not receive access to discounts and more.

“The intent there is obviously to bring exposure to Route 66 and all these businesses, and make a big financial impact right here to the area as opposed to some of the big corporate vendors that would come into big motorcycle events,” Borden said. “When they leave, they take the money with them.”

Saddle Sore Ranch will play host to biker games and activities throughout Route 66 Bike Week. Those will include poker runs, live music and popular biker contests like a big belly contest. Biker games such as slow races, barrel races, lean-your-bike and more are scheduled as well, as is a blue collar build-off judging and awards ceremony sponsored in part by Cycle Source Magazine. The build-off is a low-budget motorcycle building competition where teams from all over the country had $1,500 and 30 days to build a bike.

After the sun goes down, live music will continue, vendors will open up shop and a campfire party will commence.

“It’s a lot different than what people are used to with previous motorcycle rallies in the area,” Borden said of Saddle Sore Ranch. “Our venue is more reminiscent of a ‘60s or ‘70s style, easy rider rodeo kind of venue. It’s more of a traditional, old-school biker venue as opposed to the neon lights and things like that of Laughlin. It’s a completely different kind of feel and a breath of fresh air for bikers in the area to give them something to do and something different.”