Allure of leading Arizona pulls Lloyd away from Gonzaga 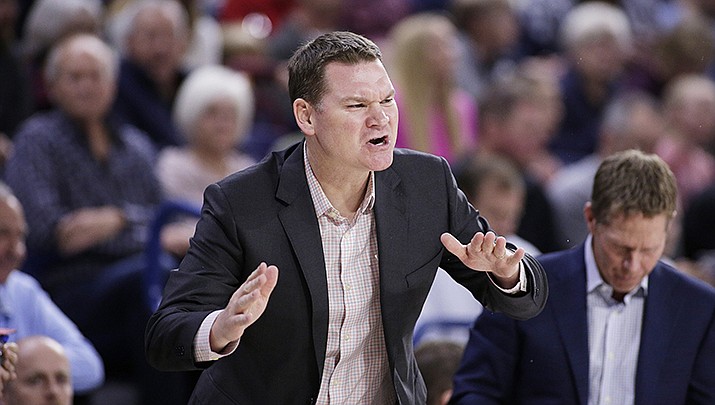 Gonzaga assistant coach Tommy Lloyd shouts to his players during the first half of an NCAA college basketball game against Texas-Arlington in Spokane, Wash., in this Tuesday, Nov. 19, 2019, file photo. Tommy Lloyd was in position to be Gonzaga's next basketball coach after Mark Few retired. A chance to coach at Arizona, one of the premier programs in the country, changed those plans. At right looking down is Mark Few. (AP Photo/Young Kwak, File)

Tommy Lloyd had chances to coach other programs. He turned them all down.

The longtime Gonzaga assistant had no interest in leaving Spokane, Washington, and was in line to succeed Mark Few when he eventually retired, so there was no reason to consider anywhere else.

But with Few still going strong and the opportunity to coach one of college basketball's premier programs suddenly in front of Lloyd, leaving for Arizona was too good to pass up.

"This was the only place I would have left Gonzaga, to come to be the head coach at the University of Arizona," Lloyd said Thursday as he was introduced at Arizona. “I can't wait to start this adventure.”

Arizona needed to make a big-splash hire following Sean Miller's firing last week after 12 seasons. Alumni and former players wanted the school to keep it in the family.

An assistant to Few for 20 seasons, he helped turn a small Jesuit school in eastern Washington into a national powerhouse.

The Bulldogs went to the NCAA Tournament every year during Lloyd's tenure under Few, reaching the Elite Eight four times and the national championship game twice in the past four years. Gonzaga lost to Baylor in this year's title game.

Lloyd has a sharp basketball mind and he helped Few create one of the sport's most efficient teams. He's proven to be an adept recruiter, particularly of international players. He also knows what it takes to run an elite-level program and the expectations that come with it.

Miller was fired after nearly four years under the NCAA microscope.

Arizona was ensnared in a 2017 federal probe into shady recruiting practices and last year the NCAA hit the school with nine allegations of misconduct in a notice of allegations, including five Level 1 violations — four against the basketball program. The case is currently going through the Independent Accountability Resolution Process.

The Wildcats have four players who entered the transfer portal since last season, including guards Jemarl Baker Jr. and Kerr Kriisa, and may lose some incoming recruits who are rethinking their commitments to Arizona.

“It obviously didn’t weigh much because I’m here,” Lloyd said of the sanctions. “You can’t always script everything in life. For me to have the opportunity to be the head coach at the University of Arizona, it probably wasn’t going to be the perfect situation. One thing, you won’t ever hear me complain about NCAA sanctions. I know what I’m walking into and I know my job is to lead the program forward.”

Lloyd's focus at first will be on players currently on the roster and trying to convince those who have considered leaving to stay in Tucson. He shouldn't have any problems recruiting top-level talent to Arizona, based on his past record and the types of recruits that have rotated into the program over the past decade.

Once his roster is set, the Wildcats' style will likely look a lot like what Few and Lloyd created at Gonzaga.

The Zags have annually been one of college basketball's most efficient offensive teams and they started making deeper March runs when the defense caught up to the offense.

"The ultimate formula to competing for national championships and Final Fours is having an offense and defense both rated in the top 20 and we've been able to consistently do that at Gonzaga the past eight or 10 years," Lloyd said. “When you're good on offense, that's what people want to talk about, but we understood that to take the next step on defense, we had to be great on defense, too. We're going to be great on both sides of the the ball and that's going to be the standard.”

Arizona had already set a high standard on the court. The chance to take it to the next level was enough to pull Lloyd away from Gonzaga.