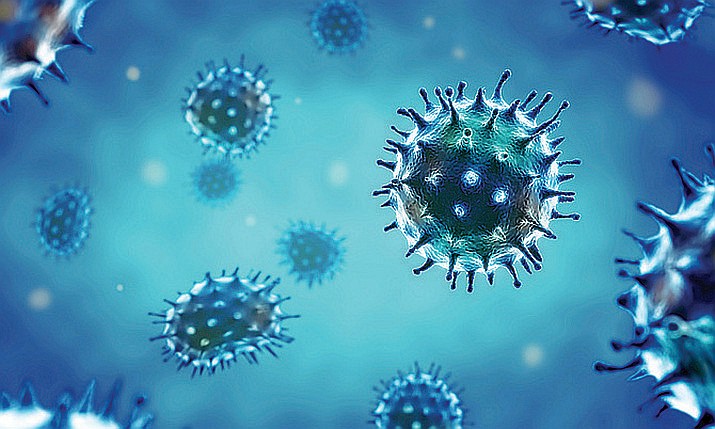 KINGMAN – As the global death toll from the pandemic cleared three million on Friday, April 16, the Mohave County Department of Public Health reported that another 47 Mohave County residents have contracted the coronavirus.

While the county reported no additional deaths, local health officials increased the death toll by three to 603 in a news release Friday. The state Department of Health Services noted two new deaths on Friday and another on Saturday, April 17.

The Bullhead City area logged the most new cases of the county’s four medical service areas with 24. There were also 12 new cases reported in the Lake Havasu City service area.

The number of new coronavirus cases continues to subside as the number of county residents vaccinated against the virus grows.

All adults are now eligible to receive the vaccine, and the county reports that the shots are readily available.

“Those who want a vaccination and have been putting it off for whatever reason, should realize that now is the perfect time to make that appointment for the first dose of Moderna,” the county wrote in a news release.

According to tabulations on the county’s website, Bullhead City has suffered the most with 178 coronavirus deaths since the beginning of the pandemic, followed by Kingman with 148, Lake Havasu City with 147, Fort Mohave with 48, Golden Valley with 31 and Mohave Valley with 18.

The locations of the remaining deaths are not specified by the county on its website.

Broken down by cities and communities, the county has recorded 5,947 cases for Lake Havasu City, 4,972 for Bullhead City, 4,495 for Kingman, 1,635 for Fort Mohave, 1,102 for Golden Valley, 759 for Mohave Valley and 442 for Beaver Dam/Littlefield/Colorado City. There have also been 141 cases in Topock, 52 in Meadview, 46 in Dolan Springs and 38 in Yucca. The locations of the remaining cases are not specified.

Since the beginning of the pandemic, 13,613 residents are known to have recovered from the virus, according to county health officials.

County health officials have logged 20,177 coronavirus cases since the first local case was reported on March 24, 2020, while the Arizona Department of Health Services has recorded 22,413 cases in the county. The county counts 603 deaths, while the state reports 698. Of Arizona’s 15 counties, Mohave has recorded the fifth most cases.

According to daily testing data from AZDHS for Friday, April 16 there were 23 new cases of COVID-19 in Mohave County from 480 new tests for a positivity rate of 5%.

Since the beginning of the pandemic 180,814 tests have been conducted on county residents and 12.6% have been positive, according to AZDHS.

Nationwide, Johns Hopkins University of Medicine was reporting more than 31.5 million confirmed cases and 566,359 deaths the morning of Saturday, April 17. The U.S. has experienced about one-fourth of all COVID-19 cases in the world, and about one-fifth of all deaths.

The two-dose Moderna COVID-19 vaccine is now being administered in Mohave County for those ages 18 and older. The Pfizer vaccine, if available, can be administered to those ages 16 and up. The county webpage listing vaccination providers can be found at https://bit.ly/39gxPYJ.

To curtail virus spread, public health officials recommend maintaining a distance of at least 6 feet from others, washing hands thoroughly and frequently, and wearing a face covering when social distancing isn’t possible.

For some patients, the virus causes mild or moderate symptoms, such as fever and cough, or no symptoms at all.

Face coverings are no longer required in businesses in Kingman, Bullhead City and Lake Havasu City by municipal proclamations, but many individual businesses still require masks.

Masks are also required inside all federally owned buildings, as well as buildings owned by the City of Kingman and in most owned by Kingman Regional Medical Center.