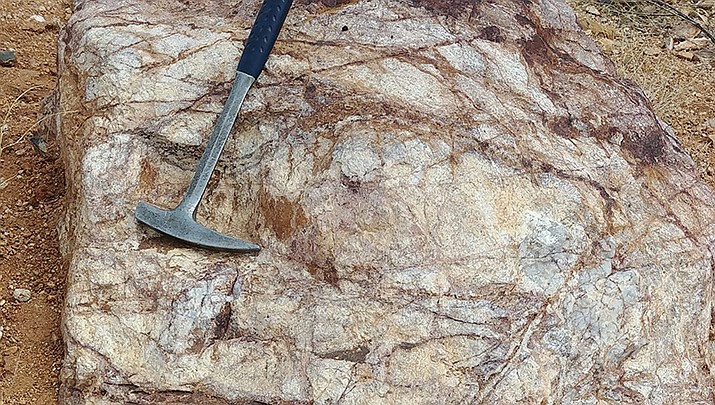 This photo shows stockwork fracturing, caused by heating of the rocks around a quartz monzonite stock, filled with iron oxide and quartz, at the Mineral Park Mine in the Cerbat Mountains. (Photo by Luis Vega/For the Miner)

Mineral deposits have been studied since man first used stones to make tools – flint and chert for arrowheads. Early man recognized that flint wasn’t found everywhere – just in places where they found a particular rock. They could’ve started a geology school to teach young warriors how to find flint to supply raw materials for the early prehistoric military establishment.

The first book written on mineral deposits based on field research and observations was De Rey Metallica, by Georgious Agricola in 1556. We’ve come a long way since that book and I find it hard to keep up with all the scientific research and publications. I even try to view many of the YouTube videos on geology. Some are good; some not so good. My favorite videos are in the series “Nick- On the Rocks.”

Back to the study of mineral deposits. The first really great modern work was the study and reports by Waldemar Lindgren (1860-1939) of the United States Geological Survey (USGS). He first wrote about a system of grouping mineral deposits, dividing them into three categories based on their physical characteristics observable in the field. The three types are epithermal, mesothermal and hypothermal. These are fancy words but as my remedial high school English teacher used to tell me, break them into their components.

Thermal means heat related. So, all lode deposits were formed by some kind of heat. In geology, heat comes from the Earth’s interior, with the molten rocks making their way to the surface or stopping at some depth.

In geology, hypothermal means deep/high pressure/hot. These types of deposits were formed when the molten rocks from deep in the earth didn’t make it near the surface but stopped deep below. This type of deposit isn’t common in Arizona and I’ve never heard of one in Mohave County so I won’t discuss this type further.

Mesothermal means moderate depth/medium pressure/hot. Molten rocks made it to within a mile of the surface before they ran out of gas and stopped to cool. They are exposed now because of uplift and erosion. As they stopped, they cooked the rocks around them and started circulating hot water filled with various metals. Just imagine a pot heating a thick, chunky soup. The hot soup in the center of the pot rises, gets to the surface and rolls down the inside edges to be heated again. The mineral deposits found at Mineral Park in the Cerbat Mountains are mesothermal. The molten rock that was the “cooking engine” was a quartz monzonite stock (intrusive) that intruded the metamorphic rocks. This molten rock cracked the host rocks, circulated fluids and deposited minerals in all the tiny fractures. Interestingly, the metals aren’t deposited the same throughout; they are zoned. In the center of the “soup,” molybdenum (moly) was deposited. Then going outward, there’s copper, lead, zinc, silver, and finally, gold at the outer-most zone.

I’ve heard rumors that Duval made more money on gold than on copper but they didn’t report the gold. Being the mine geologist for Duval at the Mineral Park Mine, taking samples and doing ore control, I can verify that Duval found very little gold in the mine and never made any money on the sale of gold. The mine produced moly, copper and silver concentrates.

Epithermal means shallow depth/low pressure/cool. The molten rocks in this case made it to the surface and formed volcanoes or calderas. As the molten rocks cooled quickly, they had no chance to form an alteration halo but they did form veins in cracks and fractures in the rocks. These types of deposits are everywhere in Mohave County – Oatman, Union Pass, Secret Pass, Pilgrim, Gold Road, Moss Mine. I could go on and on naming areas with epithermal-type deposits.

The description of these three deposit types fits with what one would think of – something formed at those temperatures, pressures and depths. The characteristics are speaking to us about how they formed. Take, for example, the mesothermal deposits formed at depths of approximately one mile, medium temperatures and moderate pressures. There were few open spaces to form veins. The molten rock had more time to cook the surrounding rocks so the rocks were altered (changed) and have large alteration “halos.” The fluids had to make their own fractures, called stockwork fracturing. The deposits cooled more slowly so there was time to form larger minerals. These types of deposits can be found in the Cerbats and the Hualapais.

Because epithermal deposits were formed close to the surface where there were open spaces, the minerals were deposited in cracks and open areas along faults. Because they cooled quickly, the minerals are fine-grained. And, because they are in the temperature range that gold and silver like, they are mostly precious metal deposits.